How do biodiversity hotspots in the mountains evolve? 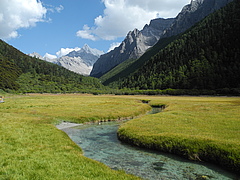 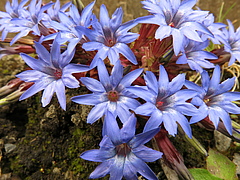 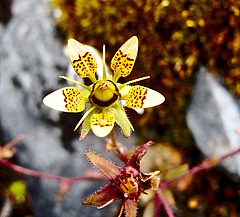 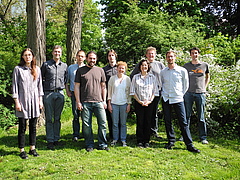 A study in the new book "Mountains, Climate and Biodiversity" postulates key conditions

Report by Alexandra Muellner-Riehl, scientist at UL/iDiv and co-author of a new study

Leipzig/Dresden/Frankfurt. A study published in the new book Mountains, Climate and Biodiversity postulates that three boundary conditions are key for the origination of montane biodiversity hotspots: full altitudinal zonation, climatic oscillations, and high-relief terrain. In this study, we compiled information about the evolution of geodiversity and present-day biodiversity in the Tibeto-Himalayan region. We also included data from investigations on plants and birds from our DFG research cluster “Origin and Evolution of Tibetan-Himalayan biotas”, conducted at Leipzig, Dresden and Frankfurt. By introducing the “mountain-geobiodiversity hypothesis”, our study highlights the importance of abiotic factors (geology, climate) on temporal dynamics of biological diversification and biodiversity levels on mountains.

Locations with a high and threatened diversity of life are often referred to as “biodiversity hotspots”. These hotspots are often associated with areas that have undergone recent tectonic/orogenic activity. Yet, the origin and evolution of these hotspots remain poorly understood. Until recently, for mountain regions like the Tibeto-Himalayan region (THR), most studies invoked orogenesis as the main driving force for high biodiversity levels. The role of climatic oscillations and other key opportunities as contributors to the establishment of high levels of mountain biodiversity was often neglected. The THR is a geographic region of high global conservation priority, and includes the Qinghai–Tibetan Plateau, the Himalaya, and the biodiversity hotspot known as the “Mountains of Southwest China”.

For our study, we first developed a historical scenario of the THR, based on geography, climate, monsoon evolution, aridification, and surface uplift history. We then reviewed the current knowledge about the evolution of present-day biodiversity, including spatial and temporal patterns of plants and vertebrates like amphibians, reptiles, fishes, birds, and mammals. We also included knowledge derived from our own studies on the evolution of different plant groups (gentians, saxifrages) and vertebrates (birds). The comparison of divergence time estimates for vertebrates and plants in the THR suggested three putative phases of high net diversification of modern families and genera: between 20-15 million years ago (mid Miocene), at around 7 million years ago (before the Miocene-Pliocene boundary), and between 2 million years and 150 thousand years ago (Pleistocene). These phases were associated with uplift events throughout the THR, an increase in geodiversity/relief, shifts in climate and an increase in the amplitude of climatic oscillations. Viewed more generally, our “mountain-geobiodiversity hypothesis” proposes that three boundary conditions are required to maximize the impact of mountain formation and surface uplift on regional biodiversity patterns in mountainous regions. These are: full zonation, i.e., the presence of lowland, montane, and alpine zones; climatic oscillations, enabling a species pump effect; and high‐relief terrain, with environmental gradients that minimize migration distances during climatic change, and provide refugia for survival as well as geographical barriers for allopatric speciation.
Alexandra N. Muellner-Riehl