Plants are conquering Europe's summits at an ever faster rate 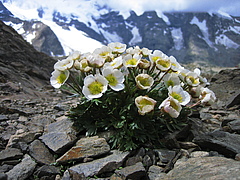 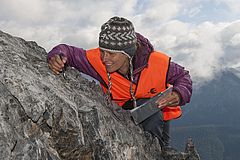 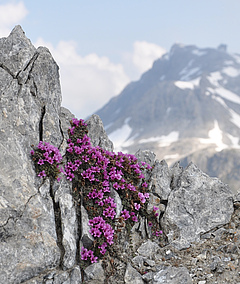 Saxifraga oppositifolia - purple mountain saxifrage. Was found by the researchers on 145 peaks. Occurs in the dataset up to more than 3500 m. Highest species of the Alps and probably even Europe, occurs a little below 4500 m. Photo: Veronika Stöckli, SLF 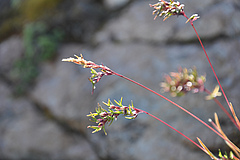 Poa alpina - alpine meadow-grass: A subalpine species, which occurs down to the valleys, for example in Klosters, Davos. Occurs in all 9 regions studied. The most successful species used to be 84, today 162 summits. Highest location was formerly at 3293 m, today at 3538 m (Rocciamelone in the Western Alps). Since Alpine bluegrass is viviparous, so small plantlets grow directly on the inflorescence, which then fall to the ground and grow there, it is quite efficient in reproduction. Photo: Veronika Stöckli, SLF

Davos/Erlangen. Significantly more plant species are growing on mountain tops today than 100 years ago. Many studies have already suggested that this trend is linked to global warming. However, no direct correlation between rising temperatures and an increase in the number of species had been extensively demonstrated before.
Such a correlation has now been established by researchers led by Manuel Steinbauer from the University of Erlangen and Sonja Wipf from the WSL Institute for Snow and Avalanche Research (SLF), working together with scientists from 11 countries including two iDiv members from the Martin Luther University of Halle-Wittenberg and Helmholtz Centre for Environmental Research (UFZ).  Two workshops of the iDiv Synthesis Centre sDiv (working group "sUMMITDiv") also made these results possible. For their study, the scientists scrutinised summit vegetation on mountain tops across Europe. In all, they surveyed populations of plant species on 302 peaks in the Alps, the Pyrenees, the Carpathian mountains and on mountain tops in Scotland and Scandinavia. The researchers compared their findings with older – in some cases historical – lists of species on the same peaks. This approach provided a unique data set spanning 145 years. Responding ever faster to climate change The results show that, in general, the number of species on Europe's summits has gone up. Moreover, the rate of this increase has grown ever faster in recent decades due to global warming, which has also steadily speeded up. The higher temperatures had risen during the timespan between two vegetation surveys on the same summit, the greater the increase in the number of plant species found there. "This is the first time that such an accelerated response to climate warming has been demonstrated in alpine habitats", says SLF researcher Sonja Wipf. So far, such accelerated processes – caused by ever faster global warming – had been demonstrated primarily for inanimate systems, such as glaciers. The researchers have now published the results of their study in the renowned journal Nature. What are the consequences? Higher temperatures are enabling more and more thermophilic species from lower elevations to push up into regions at higher altitudes, where they were unable to survive in the past. On average, these plants are larger and thus more competitive than traditional summit species, which are therefore in danger of being forced out in the longer term. However, it will be decades before we know how climate change has altered the composition of summit species in the long run. Publication:
Steinbauer, M.J. et al., “Accelerated increase in plant species richness on mountain summits is linked to warming”, Nature 2018. DOI: 10.1038/s41586-018-0005-6
https://www.nature.com/articles/s41586-018-0005-6Links:
sUMMITDiv - Europe’s alpine flora: past, present and future
www.idiv.de/summitdiv project "Summit flora and climate change"
https://www.wsl.ch/en/projects/summit-flora.html Behind the paper: The 26’950 km hike for 302 data points. Blog by Sonja Wipf
https://natureecoevocommunity.nature.com/users/89357-sonja-wipf/posts/31880-the-26-950-km-hike-for-302-data-pointsContacts:
Prof. Dr. Manuel Steinbauer
Phone: +49-9131/85-22407
https://www.gzn.nat.fau.de/palaeontologie/team/professors/steinbauer/ and
Dr. Sonja Wipf
Phone: +41 81 417 02 76
https://www.slf.ch/en/employees/wipf.html
« back to Archive 2018
Share this site on: