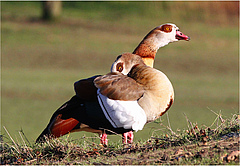 The Egyptian goose (Alopochen aegyptiaca) is native to Africa and has established populations in Central Europe for some decades. Photo: Tim Blackburn

Frankfurt am Main / Leipzig. Worldwide, the spread of non-native plant and animal species is increasing rapidly. An international team led by the Senckenberg Biodiversity and Climate Research Center (BiK-F) and with the participation of iDiv has now found that every fourth newly observed species was first registered outside its home territory. Up to 16 percent of all animal and plant species have the potential to be carried away from humans to other areas. In view of this, the control of non-native species, which pose considerable risks to humans and the environment, requires considerably more effort than before, the authors write in the renowned journal "Proceedings of the National Academy of Sciences".