Dead trees are alive with fungi 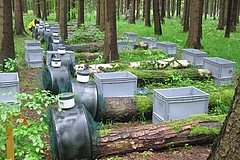 So far, little research has been conducted on fungi that live on dead trees, although they are vital to the forest ecology by breaking down dead wood and completing the element cycle between plants and soil. Soil biologists from the Helmholtz Centre for Environmental Research (UFZ) have now discovered that the number of fungus species inhabiting dead trees is 12 times higher than previously thought. Once trees die they are also colonised by different fungal communities depending on their species, as the researchers report in the ISME Journal (Multidisciplinary Journal of Microbial Ecology).

iDiv members Tesfaye Wubet und Francois Buscot are among the scientists of the research team. Read more in the media release of UFZ: www.ufz.de/index.php