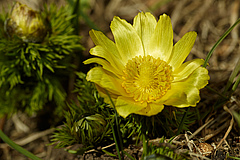 Adonis vernalis disappeared from Halle in the 19th century. This species depends on nitrogen-poor soil. It is currently classified as endangered in Germany. Photo: André Künzelmann / UFZ 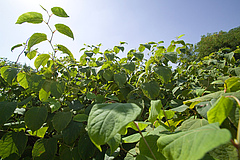 Fallopia japonica (Japanese knotweed), like the closely related Fallopia baldschuanica, has been found in Halle since the end of the 20th century. An introduced species in Germany, it grows well in warm, nitrogen-rich locations. Photo: André Künzelmann / UFZ

Halle (Saale). All over the globe, the urbanisation of landscapes is increasing. 60% of the land surface which is expected to be urban by 2030 is currently not built on at all. How this will impact on biological diversity will only be apparent in retrospect. However, for most cities there have been systematic surveys of biological diversity, although only since the second half of the 20th century. Researchers at the Helmholtz Centre for Environmental Research (UFZ) and the German Centre for Integrative Biodiversity Research (iDiv) have now revealed, on the basis of historical data, how plant diversity in the region of Halle an der Saale has changed in over 300 years of urbanisation, and have also made predictions about the future. The researchers drew on lists of species published by botanists since the 17th century as well as data from herbaria. In the 1680s, for example, physician Christoph Knauth, who was interested in botany, recorded the plant species that occurred in the area of the modern city of Halle. Rather than limiting himself to plants of pharmaceutical interest, as was usual in the 17th century, he produced an almost complete list of species. His work Enumeratio Plantarum Circa Halam Saxonum Et In Eius Vicinia, Ad Trium Fere Milliarium Spatium, Sponte Provenientium was published in 1687. In the centuries that followed, during which the city’s population increased more than tenfold, more than 20 botanists recorded the flora of Halle. Using this comprehensive data, the team led by UFZ geoecologist Dr. Sonja Knapp were able to demonstrate that the number of plant species in Halle has risen considerably between the end of the 17th century and the beginning of the 21st – from 711 to 860 species. At the same time, however, the evolutionary diversity of plants has declined: native species from a wide range of plant families have died out regionally and been replaced by more closely related species. These include both common native species and non-native species introduced from other parts of the world. Overall, 4.7 billion years of evolutionary history have therefore been lost in the Halle region, so great is the loss of evolutionary diversity – calculated on the basis of plant pedigrees. As well as looking back over the past three centuries, the researchers looked ahead to the future. The team calculated how the current evolutionary diversity of Halle’s flora would change if, firstly, the plants found in Halle listed on the Red List of endangered species disappeared and, secondly, the most common introduced species in Germany which are not yet found in Halle were to migrate there. “Evolutionary diversity will very probably continue to fall,” says Dr. Marten Winter from iDiv, who participated in the study. The evolutionary diversity of plants is considered to be an important foundation for the stability of ecosystems. It stimulates the diversity of other organisms and can increase biomass production. How many millions of years of evolutionary history would need to be lost to make an ecosystem unstable is however not yet known. Researchers are therefore appealing for the precautionary protection of biological diversity. As the loss of evolutionary diversity in Halle is primarily being driven by the loss of native species – including many species which depend on cool, nutrient-poor environments – Sonja Knapp and her colleagues are calling for more protection for these species and their habitats. Publication: Knapp S, Winter M, Klotz S.: Increasing species richness, but decreasing phylogenetic richness and divergence over a 320-year period of urbanisation. J. Appl. Ecol. DOI 10.1111/1365-2664.12826. http://onlinelibrary.wiley.com/doi/10.1111/1365-2664.12826/fullFurther information: Dr. Sonja Knapp
UFZ Department of Community Ecology
Tel.: +49 345 558-5308
https://www.ufz.de/index.php?en=38610 and Dr. Marten Winter
German Centre for Integrative Biodiversity Research (iDiv)
Tel.: +49 341 97-33129
https://www.idiv.de/en/groups_and_people/employees/details/eshow/winter-marten.html
« back to Archive 2017
Share this site on: