Estimating the size of animal populations from camera trap surveys 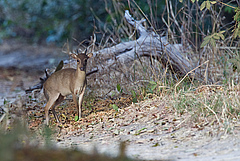 Camera traps are a useful means for researchers to observe the behaviour of animal populations in the wild or to assess biodiversity levels of remote locations like the tropical rain forest. Researchers from the University of St Andrews, the Max Planck Institute for Evolutionary Anthropology and the German Centre for Integrative Biodiversity Research (iDiv) recently extended distance sampling analytical methods to accommodate data from camera traps. This new development allows abundances of multiple species to be estimated from camera trapping data collected over relatively short time intervals – information critical to effective wildlife management and conservation.

For this reason, camera traps were initially popularized by researchers studying big cats and other species with distinctive coat markings. Since then, thousands of camera traps have been deployed in wildlife habitat across the globe, especially in tropical forest ecosystems where animals are difficult to survey by other means. However, methods for estimating abundances of species which cannot be individually identified are still in development, and none is generally accepted or broadly applied.

Researchers from the University of St Andrews, the Max Planck Institute for Evolutionary Anthropology (MPI-EVA) and the German Centre for Integrative Biodiversity Research (iDiv) recently extended distance sampling analytical methods to accommodate data from camera traps. “Distance sampling is a very well-established statistical framework for estimating animal density and population size that is already familiar to many ecologists”, says Hjalmar Kühl of the MPI-EVA and iDiv. “This development will pave the way for researchers to estimate abundances of multiple species from camera trapping data collected over relatively short time intervals, without identifying individuals, and with minimal additional field work.” Kühl adds: “This new approach can be easily integrated into our ongoing camera trap surveys across a broad range of habitats and species; we will also apply it in our monitoring work."

The models are implemented in the free, Windows-based software Distance, and various packages of the statistics software R. Detailed documentation and advice from statisticians is also freely available via the Distance project website (www.distancesampling.org).

Further testing and validation are recommended. Nevertheless, this development is an important addition to the set of analytical methods available to researchers conducting camera trap surveys. It can improve the quantity and quality of information about animal abundance and how it varies in space and time, facilitating effective conservation management.

Stephen Buckland of the University of St. Andrews states: “Many animal populations are difficult to monitor effectively, but technological advances are opening up new strategies. The challenge for the statistician is to keep pace with the technological advances, and ensure that models are available to exploit fully the resulting data. This work is an important step in that direction.”

Eric Howe of the University of St. Andrews ads: “Given the current rates of species extinction and loss of biodiversity, I’m excited to be involved in research that has the potential to provide improved information to wildlife and conservation managers in a timely fashion.” EH, SJ

Video  2: Reference video from another camera with a researcher demonstrating measured horizontal distances from the camera lens (video: MPI-EVA).