When peaceful coexistence turns into competition 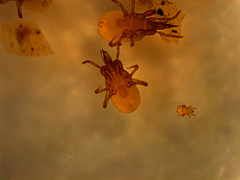 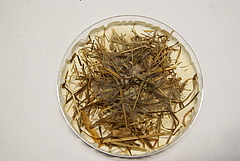 Impacts of climate change on the natural world

Biologists agree that climate change causes not only more heat waves and flooding, but also reduces biological diversity. The specific processes that ultimately cause species to go extinct have, however, been little studied so far. Scientists at the German Centre for Integrative Biodiversity Research (iDiv) and the Leipzig University have now discovered one of the possible causes for species loss due to climate change thanks to an intriguing experiment: When temperatures rise, the complex relationships between species are changing. Prey species not only become stronger competitors for scarce resources, but also more preyed upon. These findings have now been published in the renowned journal "Proceedings of the Royal Society B". To find out how rising temperatures could affect species diversity, biologists from the German Centre for Integrative Biodiversity Research (iDiv) and the Leipzig University have developed a simple experiment: they covered the bottom of different Petri dishes with litter material, then put in two species of springtails, that is, arthropods only a few millimetres in size, and then added mites feeding on springtails. Subsequently, for some of the Petri dishes they increased the ambient temperature from originally 13.5°C to 18.5°C and for some other Petri dishes to 23.5°C. In those Petri dishes, the temperatures were hence five, respectively ten degrees higher than the conditions to which the animals had been exposed to in long-term cultures over years. This created simplified miniature ecosystems under climate change conditions, in which the springtail species that peacefully coexist in the wild represented the prey, and the mites represented the predators. For two months, the researchers then observed how the interactions between the three species would develop with different temperatures. Madhav P. Thakur, the lead author of the study, explains the initial hypothesis of the Leipzig scientists: “We had actually been expecting that the smaller of the two springtail species would cope better with higher temperatures than the larger species. Their need for food is generally lower, so that it should increase less sharply under the new conditions". The actual results took the researchers by surprise: After two months, the smaller springtail species had completely disappeared in the warmer Petri dishes, whereas the larger species had managed to survive. The study authors suspect that the smaller species was doomed due to two reasons: On the one hand, it was under a higher risk of being eaten. At higher temperatures, the predator’s need for food also increases due to the generally elevated metabolism. Smaller prey are probably easier pickings than larger animals, because it is harder for them to escape from predators. On the other hand, the members of the smaller species were clearly and significantly less successful at adapting to the altered conditions – even though it is generally advantageous at higher temperatures to have a small body size. "This apparent paradox could be explained by the fact that the smaller springtail species was less able to acclimate to warmer environments, that is, to adapt its metabolism to the higher temperature, and simultaneously suffered a heavy predation. In contrast, the larger prey species could cope better with the new conditions and also more successfully escaped predation.” says Thakur, who is a scientist at the iDiv research centre and the Leipzig University. If these findings were extrapolated to the natural world, this could mean that in the future some animal species will not only be burdened by increasing energy needs through rising temperatures, but will also be under threat due to the changing interactions between species. Thus, there is not only an increased competition for scarce resources among species on the same tier of the food chain, but also a higher probability of being eaten by predators as climate continues to warm. "This study once again demonstrates how little we understand about and can predict the complex interactions between species under future environmental conditions. Further studies with more complex communities and various model systems are urgently required here, to generate a comprehensive understanding", believes Prof Dr Nico Eisenhauer, the senior author of the study, who is a group leader at the iDiv research centre and Professor of Experimental Interaction Ecology at the Leipzig University. The scientists had deliberately opted for using springtails in their study. These animals are not only easy to keep in the laboratory, but also play a crucial role in nature as decomposers of dead animal and plant material. If their species richness decreases due to climate change, some of their functions could be lost, and many processes within the ecosystems might unravel. Video:A mite attacks a larger prey species – without success. Then it goes for a smaller prey species ... (Video: Tom Künne).