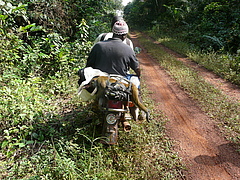 New analyses of interview data collected in Liberia show a decrease in bushmeat consumption and meal frequency during the Ebola crisis. However, wealthy households reduced their consumption of bushmeat less than poor households. Moreover, people who had knowledge on the health risks associated with eating bushmeat reduced their consumption substantially more than people who lacked this knowledge. Wild animal meat, commonly known as bushmeat, provides an important source of protein and income for humans in tropical Africa. On the downside, bushmeat hunting is a major threat to wildlife diversity. Its consumption may also increase a person’s risk of acquiring diseases that are transmitted from wild animal hosts to humans, such as Ebola. Less consumption of bush meat An international team of researchers from the Max Planck Institute for Evolutionary Anthropology in Leipzig, Germany, has now investigated changes in bushmeat consumption during the recent Ebola crisis and found that there was an overall decrease in daily meal frequency and that the consumption of bushmeat decreased less in wealthier households than in poorer households. Involved was also iDiv member Hjalmar S. Kuehl. “Perhaps poor households were no longer able to afford bushmeat, as prices were likely to have gone up during the crisis”, says Isabel Ordaz Németh, lead author of this study. “It is also possible that hunters preferred to sell the meat rather than consume it themselves in order to ensure cash-flow during times of crisis, or that they went hunting less often out of fear to get infected.” Although general school education did not have an effect on bushmeat consumption, people who had specific knowledge about the health risks of bushmeat consumption consumed less of it. This suggests that there is a difference in the effect of general education and specific knowledge on human behavioral patterns. With over 28,000 cases and 11,300 deaths reported in Guinea, Liberia and Sierra Leone, the 2014/15 Ebola epidemic was the largest ever recorded. This deadly disease can be transmitted to humans by infected wild animals, like fruit bats, forest antelopes and nonhuman primates. The handling and consumption of bushmeat may thus increase a person’s risk to fall ill from the disease. The researchers analyzed interview data from two nationwide household surveys that were conducted in Liberia before (2010-2012) and during (2015) the Ebola crisis. “Travelling on motorbikes across the country to conduct the interviews was very challenging- sometimes villagers wouldn’t let us stay overnight because they thought that we carried the virus”, says Menladi Lormie who led the data collection in the field. Despite this risk, bushmeat consumption is widespread in tropical Africa. Wild animal meat is an essential source of protein and a source of income for hunters, especially in rural areas. In cities and areas with better infrastructure, consumers have more access to alternative animal protein sources, such as fish and chicken, in addition to bushmeat. Demand could increase after the epidemics These were consumed more often during the crisis despite rising prices due to the increased demand. However, people did not change their preferences for certain bushmeat species. “The drop in bushmeat consumption during the crisis does not imply that people did not like bushmeat anymore”, says Jessica Junker, coordinator and co-author of this study. “In fact, taste preferences and tradition play a very important role in human dietary choices and will probably drive bushmeat consumption levels up again after such a crisis.” “If we want to prevent similar crises from happening, future efforts must aim at substantially reducing the harvest of bushmeat while at the same time improving human livelihoods and food security in these countries. For example, campaigns which teach people specifically about the risks of handling and eating bushmeat, and programs to increase access to alternative protein sources may help to achieve this goal”, says Ordaz Németh. “Our multidisciplinary approach to study the impact of the Ebola outbreak on human behavior can be applied to assess how other disasters may affect social-ecological systems and improve our understanding and the management of future crises”. SJ, IO, JJ/HR
Press release of the Max Planck Institute for Evolutionary Anthropology: https://www.mpg.de/11173782/ebola-bushmeatOriginal publication:
Isabel Ordaz-Németh, Mimi Arandjelovic, Lukas Boesch, Tsegaye Gatiso, Trokon Grimes, Hjalmar S. Kuehl, Menladi Lormie, Colleen Stephens, Clement Tweh & Jessica Junker:The socio-economic drivers of bushmeat consumption during the West African Ebola crisis.PLOS Neglected Tropical Diseases, 10 Mar 2017, doi: 10.1371/journal.pntd.0005450
http://journals.plos.org/plosntds/article?id=10.1371/journal.pntd.0005450
« back to Archive 2017
Share this site on: