How threatened are soil animals? 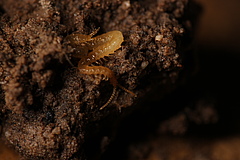 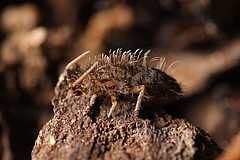 Springtails are so small that they are barely visible to the naked eye (Foto: Sarah Zieger).

This is another species of springtail. The name "springtail" is derived from a tail-like appendage these animals use for jumping (Photo: Sarah Zieger).

The velvet mite has a hairy body (Photo: Sarah Zieger).

A significant proportion of all animal species on our planet lives in the soil. Yet, we know surprisingly little about them. Only few soil invertebrates have been categorized in red lists with respect to how threatened they are. And, what is more: this categorization has been mostly based on scarce data. In a commentary in Nature Ecology and Evolution, an author team led by scientists from iDiv and Leipzig University call for initiatives to illuminate the “black box” of soil biodiversity. Soil invertebrates like springtails, millipedes, earthworms, and nematodes are underrepresented in many biodiversity databases. Hence, they are often not considered in analyses about the status and trends of global biodiversity. Specifically, little is known about how below ground biodiversity is threatened by environmental changes such as human land use or climate change. Therefore, the authors of the recently published commentary advocate for large, collaborative initiatives to mobilize the necessary data. “There are two main gaps of knowledge that we need to address”, explains senior author Nico Eisenhauer. “First, we need to determine if global soil biodiversity is currently declining at the local scale, and second, we need to understand which factors drive this potential decline”. The lack of available data on soil animals is also mirrored by both national and global red lists, where animals dwelling below ground are dramatically underrepresented. Although they appear on some red lists in small numbers, there still is a pronounced bias towards more charismatic organisms such as mammals, fish, butterflies or plants. Red lists are an important tool for biodiversity conservation. Therefore, it is very important to get soil invertebrates represented on those lists, the study authors argue. Tabea TurriniPublication:
Phillips, Helen R. P., Erin K. Cameron, Olga Ferlian, Manfred Türke, Marten Winter & Nico Eisenhauer (2017): Red list of a black box. Nature Ecology & Evolution 1, doi:10.1038/s41559-017-0103.Further information:Prof Nico Eisenhauer
Head of the research group Experimental Interaction Ecology at the German Centre for Integrative Biodiversity Research (iDiv) Halle-Jena-Leipzig and Professor at Leipzig University
https://www.idiv.de/groups_and_people/employees/details/eshow/eisenhauer-nico.html
« back to Archive 2017
Share this site on: