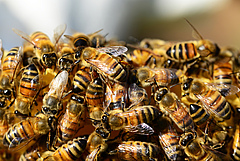 University Park, Pa./Leipzig/Halle(Saale). An international team of researchers has identified a core set of genes involved in the responses of honey bees to multiple diseases caused by viruses and parasites. The findings provide a better-defined starting point for future studies of honey bee health, and may help scientists and beekeepers to breed honey bees that are more resilient to stress. The study was carried out by an international working group at the iDiv research centre. Among the authors are also scientists of the Martin Luther University Halle-Wittenberg. The findings appear in the 2 March issue of BMC Genomics.

"In the past decade, honey bee populations have experienced severe and persistent losses across the Northern Hemisphere, mainly due to the effects of pathogens, such as fungi and viruses," said Vincent Doublet, who coordinated the research at sDiv, the synthesis centre of the German Centre for Integrative Biodiversity Research (iDiv) and is now a postdoctoral research fellow at the University of Exeter. "The genes that we identified offer new possibilities for the generation of honey bee stocks that are resistant to these pathogens." An essential part played two workshops organized by sDiv in 2013/14 where the international research team met in Leipzig as part of the "TRANs-BEE" project.

According to the researchers, recent advances in DNA sequencing have prompted numerous investigations of the genes involved in honey bee responses to pathogens. Yet, until now, this vast quantity of data has been too cumbersome and idiosyncratic to reveal overarching patterns in honey bee immunity. "While many studies have used genomic approaches to understand how bees respond to viruses and parasites, it has been difficult to compare across these studies to find the core genes and pathways that help the bee fight off stressors," said Christina Grozinger, Distinguished Professor of Entomology, Penn State. The Bioinformatics Unit of iDiv created a new bioinformatics tool that has enabled the team to integrate information from 19 different genomic datasets to identify the key genes involved in honey bees’ response to diseases.

The scientists found that these similarly expressed genes included those that encode proteins responsible for the response to tissue damage by pathogens, and those that encode enzymes involved in the metabolism of carbohydrates from food, among many others. A decrease in the latter, they suggested, may illustrate the cost of the infection on the organism.

"Honey bees were thought to respond to different disease organisms in entirely different ways, but we have learned that they mostly rely on a core set of genes that they turn on or off in response to any major pathogenic challenge," said Robert Paxton, professor of zoology at the Martin Luther University Halle-Wittenberg and a member of iDiv. "We can now explore the physiological mechanisms by which pathogens overcome their honey bee hosts, and how honey bees can fight back against those pathogens."

The implications of the findings are not limited to honey bees. The team found that the core genes are part of conserved pathways -- meaning they have been maintained throughout the course of evolution among insects and therefore are shared by other insects. According to Doublet, this means that the genes provide important knowledge for understanding pathogen interactions with other insects, such as bumble bees, and for using pathogens to control insect pests, such as aphids and certain moths.

"This analysis provides unprecedented insight into the mechanisms that underpin the interactions between insects and their pathogens," said Doublet. "With this analysis, we generated a list of genes that will likely be an important source for future functional studies, for breeding more resilient honey bee stocks and for controlling emerging bee diseases."

This research was supported by iDiv, the German Center for Integrative Biodiversity Research, located in Leipzig, Germany.