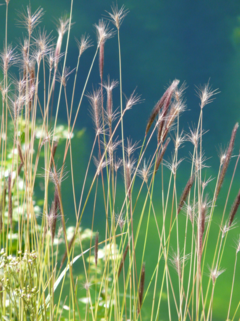 Gatersleben. A Czech-German team of researchers around Dr. Václav Mahelka from the Institute of Botany of the Czech Academy of Sciences and iDiv member Dr. Frank Blattner from the Leibniz-Institute of Plant Genetics and Crop Plant Research (IPK) publishes findings in the renowned scientific journal PNAS suggesting that the transfer of nuclear genes from one vascular plant species to another without sexual fertilisation is not a rare event.

The exchange and recombination of genetic material between procaryotes and from parasites and pathogens into plants is known to be commonplace. Also plant to plant exchanges of nonnuclear DNA (deoxyribonucleic acid) are also relatively common. However, nuclear gene transfers between sexual incompatible vascular plant species were thought to be extremely rare. This assumption is now questioned by a study online published as an Early Edition of the renowned scientific journal Proceedingsof the National Academy of Sciences (PNAS). Its authors demonstrate, that such events are not as rare as thought hitherto. Rather, their research findings indicate, that horizontal gene transfer between vascular plant species is a genuine biological phenomenon.

„In our study we analysed the genetic material of about 25 grass species, mainly from the barley genus Hordeum. In 16 species out of them we proved, that at least nine independent DNA-transfers of Panicoideae origin  ̶  a subfamily comprising important crop species like maize, sugar cane and panic  ̶  seem to have been occurred,” illustrates the lead author of the study Václav Mahelka from the Institute of Botany in Prúhonice. „Our phylogenetic, cytogenetic, and genomic analyses imply that the nonnative sequences were acquired during the last 1 to 5 My through a series of independent events.” His colleague Dr. Frank Blattner from IPK in Gatersleben adds „These findings were a surprise, because Poodieae and Panicoideae lineages separated from one another around 60 Mya and are sexually incompatible. However, now we assume, that the supposed rarity of exotic DNA transfer between vascular plants more likely reflects technical limitations in its detection than reflecting essential biological circumstances.”