How trees cooperate with each other: Nine new graduate students at iDiv 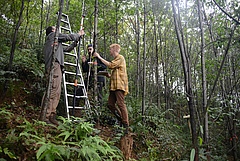 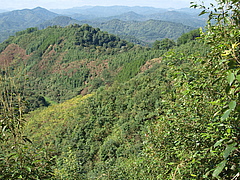 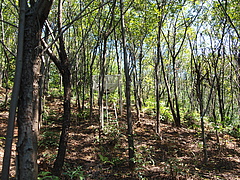 Major success for biodiversity research in Central Germany: A new international research training group (IRTG) at Martin Luther University Halle-Wittenberg (MLU) focuses on how trees interact with each other and on the consequences of these interactions for the ecosystem. The Deutsche Forschungsgemeinschaft (German Research Foundation, DFG) will be funding the PhD programme for the next four-and-a-half years with around 3.5 million euros. MLU is collaborating with the University of Chinese Academy of Sciences in Beijing for this project. Doctoral researchers funded by the DFG will be based at the German Centre for Integrative Biodiversity Research (iDiv) Halle-Jena-Leipzig.

Forests are the world's most important ecosystems: They absorb large volumes of carbon dioxide, produce oxygen and regulate the climate. Past studies have shown that increased tree diversity can actually improve these services. However, this aspect has so far only been examined at the level of the forest ecosystem as a whole. The interaction between the individual trees has only played a marginal role in this research. This aspect will provide the starting point for the new GRK, which is called Tree Diversity Interactions: The role of tree-tree interactions in local neighbourhoods in Chinese subtropical forests (TreeDì). "Belowground, at the roots, trees shake hands and exchange information as well as nutrients. Above the ground, they share the light and create a favourable microclimate for each other. The PhD projects intend to highlight the processes and mechanisms that are behind this cooperation," says geobotanist Professor Bruelheide from MLU, the co-director of iDiv and also the new IRTG’s designated spokesperson. He says further aims are the definition of principles and the development of models to explain these interactions.

In the course of their PhD work, the young scientists will also be introduced to modern molecular biological analysis techniques as well as complex statistical calculation methods, as one important element of the research focuses on the synthesis of already existing data records collected by the DFG research group "BEF-China", which was based at MLU until 2016. Within the scope of this work, fully customised forests with more than 200 different combinations of tree species pairs were planted in China. Their development and ecosystem functions were then documented. "China was the only country suitable for the realisation of this project, as it is the only country where the number of tree species is high enough to investigate the general mechanisms of tree-to-tree interaction that go beyond the unique characteristics of each individual species. Each research project supplies a small piece for the big jigsaw puzzle of how the interaction between trees works," Bruelheide continues.

In the first IRTG funding period, the funds will cover 18 PhD positions: Half of these PhD students will be working in Germany, the other half in China. The young scientists working in Germany will be based at the German Centre for Integrative Biodiversity Research (iDiv) in Leipzig. At the DFG research centre, jointly managed by the universities in Halle, Jena and Leipzig and the Helmholtz-Centre for Environmental Research (UFZ), leading researchers from all over the world are already jointly addressing projects and research subjects. The universities in Freiburg, Lüneburg, TU Dresden and the Leibniz Institute of Plant Biochemistry (IPB) will also be involved in the new IRTG.

One other important element besides the academic qualifications the young scientists will be gaining in the process is the cultural exchange within the scope of the programme: The PhD students will spend at least six months in their respective partner country to attend language courses in German or Chinese, respectively, and to gain some insights into the local research work and network internationally. "At the same time, we want the PhD students to familiarise themselves with the concept of working independently and writing their own scientific papers at an early stage," Bruelheide continues. On the schedule are not only research stays but also joint summer schools, excursions and internal annual conferences that will be held alternately in Germany or China.