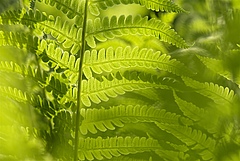 First global maps of plant traits that drive vegetation growth are published in the Proceedings of the National Academy of Sciences (PNAS) and conducted by a multi-disciplinary team of researchers from institutions across the globe, including J. Kattge, C. Wirth, and G. Boenisch from MPI-BGC and iDiv. Photo: Matteuccia struthiopteris by Pixabay

Jena/Leipzig. Detailed global maps of key traits of higher plants have been compiled for the first time, thanks to researchers from the University of Minnesota in collaboration with the Max Planck Institute for Biogeochemistry (MPI-BGC), Jena, Germany, and the German Centre for Integrative Biodiversity Research (iDiv). Based on measurements of 45,000 individual plants from 3,680 species, and high-tech statistical mapping protocols, the team created global maps of plant traits essential for growth. These include leaf nitrogen concentration, leaf phosphorus concentration, and specific leaf area, a measure of the area displayed to intercept light relative to leaf biomass. The fine-grained maps with more than 50,000 pixels show surprisingly large local variations in these trait values.  Since the plant traits mapped in the study are critical for photosynthesis and foliar respiration, they serve as input to Earth System models (ESMs). Consequently, the large local variations observed could significantly impact future carbon cycle calculations produced by Earth System models (ESMs). Incorporating this local variability of plant traits in the ESMs should thus lead to more accurate modeling of carbon cycle feedbacks. Altogether, the large local variation sheds a new light on the relevance of biodiversity as a prerequisite for ecosystem resilience in the context of environmental changes, e.g. climate change.

The study, published in the Proceedings of the National Academy of Sciences(PNAS), was conducted by a multi-disciplinary team of researchers from institutions across the globe, including J. Kattge, C. Wirth, and G. Boenisch from Max Planck Institute for Biogeochemistry (MPI-BGC) and the German Centre for Integrative Biodiversity Research (iDiv) Halle-Jena-Leipzig. “The scarcity of field observations is a major roadblock in creating global maps of plant traits”, says Jens Kattge, group leader at MPI-BGC and coordinator of the TRY database. “By using TRY, the largest plant trait database to-date, several times larger than any other used before, we were able to overcome such roadblocks and considerably advance previous trait mapping approaches.” The TRY database is maintained at MPI-BGC in Jena.

However, despite its unprecedented numbers of observations, the geographical coverage of TRY is still limited, with few or no data for Russia, large regions of Africa and for the tropics.  “This is particularly important when considering the high species diversity in some of these underrepresented regions. “, explains Kattge.” We therefore used advanced machine learning techniques to fill the gaps by extrapolating plant trait observations based on a combination of climate, soil, and spatial information.” The resulting maps provide a characterization of how traits vary within and among over 50,000 cells, each spanning 50 km x 50 km, across the entire vegetated land surface of the globe.”

According to Christian Wirth, head of the research group at MPI-BGC, Professor at Leipzig University, and Director of iDiv  “the current Earth system models represent variations in plant characteristics based on few parameter (values) only; an individual model might be as simplistic as assuming that all leaves in Amazonia or Alaska are identical. However, the new maps reveal that local functional diversity is of substantial importance; ignoring this fact is problematic. The large local variation highlights the relevance of biodiversity for ecosystem function, and its integration into next-generation EMSs will lead to improved carbon cycle models“.

The EU 2020 project BACI (http://baci-h2020.eu/index.php/), coordinated by MPI-BGC, has supported the development of these maps.  BACI aims at combining in-situ measurements with multiple remote sensing Earth observations to monitor changes in the biosphere-atmosphere system. Kattge notes that "the maps of global plant trait patterns complement the rich portfolio of Earth observations already combined in the BACI project. The combination of in-situ and remote sensing Earth observations will enable us to better describe and understand the ecosystem functions in the Earth system."

Link to the publication: