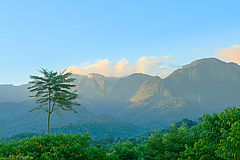 Princeton, USA. Mathew A Leibold of the University of Florida and Jonathan M Chase of iDiv and Martin Luther University Halle-Wittenberg are authors of the book ‘Metacommunity Ecology’ published this week by Princeton University Press.  The book was published in Princeton’s prestigious ‘Monographs in Population Biology’ series, which includes some of the most influential works in the field in recent decades. In their book, Leibold and Chase have synthesised the emergent field of metacommunity ecology, which links smaller-scale processes such as birth-death processes and species interactions with larger-scale issues such as dispersal and habitat heterogeneity. Leibold and Chase take disparate and sometimes contradictory evidence and show how it all fits into a much more cohesive framework that connects communities and biodiversity to evolution and ecosystems.

‘Current thinking in ecology is a disorganized soup of ideas, from dispersal and spatial heterogeneity to temporal change, species sorting, and evolution. This book impressively pulls these disparate threads into a powerful and coherent framework based on metacommunities. Its next-generation metacommunity framework could well serve as a launching pad for the next decade of ecology.’ Brian McGill, University of Maine