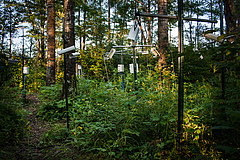 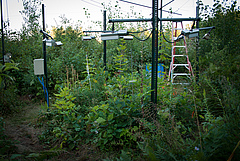 One of the warmed plots where trees have been logged as part of the experiment (photo: Benjamin Schwarz, FSU Jena).

...and even more so when tree logging and drought occur at the same time

Leipzig / Minnesota (USA). Warming temperatures are expected to influence diversity of microbes and animals in the soil, and thus, ecosystem functioning. How this influence of changing temperature might interact with other human influences on soil biodiversity, however, is unknown. This was the focus of a recent study led by scientists from iDiv, the University of Jena and Leipzig University and published in the renowned journal Nature Climate Change. The researchers studied the effect of warming on soil biodiversity in forests and found that with warmer temperatures, microbial species dwelling in the soil became less active, while soil animals became more active and were feeding at higher rates. These effects became even stronger when experimentally combined with tree felling and drought.

Specifically, the researchers investigated how warming (by up to 3.4 °C) influences the flow of energy in forest soil food webs simultaneously exposed to forest disturbance (tree felling) and drought (rainfall reduced by 40%). To this end, they used a long-running warming experiment called B4WARMED (Boreal Forest Warming at an Ecotone in Danger) in Minnesota, U.S.A. By quantifying energy flux among trophic groups, the researchers were able to understand how energetic structure (patterns of energy flux via feeding interactions) of soil food webs change when they are exposed to multiple global change drivers. Furthermore, the researchers could directly relate these changes to ecosystem functioning. This is because fluxes of energy among soil organisms describe important functions carried out in soil food webs, such as decomposition of organic material and herbivory of plant roots.

The research team was surprised to find highly contrasting responses in microbes compared to the rest of the soil food webs. In particular, the simultaneous reduction in energy flux to microbes and increase in energy flux to soil animals have two important implications: 1) combined global change drivers will likely have negative effects on some ecosystem functions, but positive effects on others and 2) warming can drive a shift in the distribution of energy toward higher trophic levels in soil food webs, potentially reducing their stability. These impacts could both be particularly concerning for forest ecosystems because it could mean that some functions crucial for forest health could be affected. For example, increasing herbivory on plant roots (as animals get more active) and decreasing decomposition of organic material (as microbes get less active) might have detrimental impacts on the production of plant biomass in forest ecosystems. Furthermore, a reduction in soil food web stability could mean that biodiversity and ecosystem functions in these forest ecosystems are becoming increasingly susceptible to future disturbances, such as biological invasions. To investigate this second implication further, the researchers quantified the resilience of the soil food webs to future perturbations, but were surprised to find little evidence for reduced resilience. The reasons for the apparent robustness of these warmed soil food webs is unknown and will require continued exploration to better understand how forest soil communities will likely fare under increasing human pressures in the future. Andrew Barnes