Rewilding as a means to reinforce Europe's ecological restoration 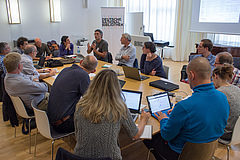 From 25 to 27 September, 26 experts from science, conservation policy NGOs and practice met at iDiv. The workshop laid the groundwork for providing scientific evidence in support of promoting the European Union’s (EU) ecological restoration agenda. The workshop was part of a three-year initiative launched earlier this year, in which Rewilding Europe, several European NGOs and the German Centre for Integrative Biodiversity Research (iDiv) cooperate to strengthen the creation of a coherent ecological network in Europe. Research activities form an integral part of the initiative and are coordinated by Néstor Fernández and Aurora Torres from iDiv / Martin Luther University Halle-Wittenberg. The aim is to provide the scientific basis for using rewilding principles in EU environmental policy that are capable to restore dynamic and self-sustaining ecosystems. During the workshop, the participants took the first steps towards identifying areas across Europe that are potentially suited for implementing rewilding in support of restoring biodiversity and ecosystem functions. On the map that they will produce during the upcoming months, the priority areas will not necessarily be already protected landscapes. “If we want to conserve biodiversity and ecosystem services in the long term, we need to expand conservation outside protected areas”, says Néstor Fernández. “There are possibilities for making the landscape wilder for example also in agricultural areas, forests, wetlands, or even in cities”. The interdisciplinary workshop team now aims at elaborating evidence for how the EU could profit from seizing these possibilities. In doing so, the researchers also take into account the potential of rewilding to create socioeconomic benefits for local communities and beyond. Aurora Torres says: “Rewilding is not only beneficial for biodiversity, but it can also be beneficial for people. Restoring ecosystems can generate opportunities to re-connect people and nature, promote nature-based economies and increase human well-being. For example, many people enjoy a wilder nature for recreation”. Another focus of research is to identify synergies with EU policies that are not directly tailored towards conservation of species and habitats, for example the EU common agricultural policy, the climate change adaptation strategy and water policies. Given that rewilding contributes to achieving good ecological status of aquatic systems, it would support the implementation of the Water Framework Directive and Floods Directive. In order to achieve their multiple research goals, the workshop participants have formed five interdisciplinary teams. “We were able to establish collaborations with the top scientists in the area of biodiversity in Europe”, Fernández says. "This collaboration between scientists, policy experts and practitioners was extremely useful," adds Frans Schepers, Managing Director of Rewilding Europe and overall coordinator of the initiative. "The EU restoration agenda is lagging behind. We are now working to provide a substantial and well-coordinated input which we look forward to sharing with the European Commission in due course." The workshop was part of the initiative ‘Promoting and shaping the EU restoration agenda, including TEN-G, through mobilisation of rewilding principles to create a coherent ecological network in Europe’. Funded by WWF Netherlands, it represents a collaboration between Rewilding Europe, BirdLife Europe and Central Asia, the WWF European Policy Office, the European Environmental Bureau and iDiv. Mei Abraham Elderadži / Tabea TurriniRead more on the initiative here:https://www.idiv.de/news/news_single_view/news_article/green-shoots.htmlContact:Dr Aurora Torres
German Centre for Integrative Biodiversity Research (iDiv)
Martin Luther University Halle-Wittenberg
Research group “Biodiversity Conservation”
Phone: +49 341 9733123
https://www.idiv.de/en/groups_and_people/employees/details/eshow/torres_aurora.htmlDr Néstor Fernández
German Centre for Integrative Biodiversity Research (iDiv)
Martin Luther University Halle-Wittenberg
Research group “Biodiversity Conservation”
Phone: +49 341 9733229
https://www.idiv.de/de/gruppen_und_personen/mitarbeiterinnen/mitarbeiterdetails/eshow/fernandez-nestor.htmlandDr Tabea Turrini
German Centre for Integrative Biodiversity Research (iDiv)
Media and Communications
Phone: +49 341 9733 10
www.idiv.de/de/presse/mitarbeiterinnen.html
« back to Archive 2017
Share this site on: