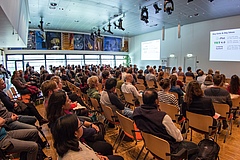 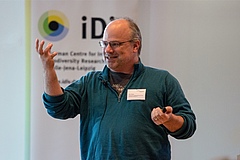 Leipzig.iDiv members met for the annual General Assembly at the UFZ Kubus in Leipzig on Tuesday. A key topic was “taproots”, a bottom-up approach to redefine and optimise iDiv’s future research strategy. The idea behind “taproots”, as presented by Jonathan Chase, is to identify research areas of great importance, where overlap in research interests could lead to synergies. iDiv members started to discuss the new taproot concept, but in-depth debates are to continue in the course of the iDiv Annual Conference.

The taproot initiative was explicitly praised by Stefan Klotz. In his presentation, Klotz reviewed past activities of the iDiv Speakers Group, which he is heading. iDiv’s Managing Director Christian Wirth presented iDiv’s achievements since the last General Assembly and highlighted ongoing activities. Chief Operating Officer Sabine Matthiä pointed out open questions concerning criteria and requirements for iDiv membership. She presented a schedule for resolving these open questions and asked members to send their feedback to the iDiv Speakers Group.