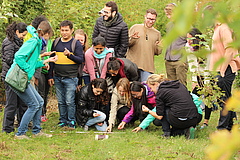 Participants of the summer school during an excursion to the Bad Lauchstädt field site (photo: Volker Hahn). 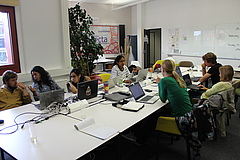 From 3-15 September, the 3rd iDiv Summer School on “Synthesising and modelling biodiversity data” took place. It concluded on Friday with a closing symposium and ceremony. This year’s summer school was led by Prof Nico Eisenhauer, head of the Experimental Interaction Ecology research group. During the two weeks, the 24 international participants underwent intensive training in meta-analysis or structural equation modelling. “It was a really nice experience to learn several new approaches that were not familiar to me from before”, says Marina Golivets, a doctoral researcher from the Rubenstein School of Environment and Natural Resources at the University of Vermont who participated in the summer school. The participants attended plenary lectures from various iDiv scientists presenting different approaches to biodiversity research as well as highlights of current iDiv research. A major focus of the summer school was on hands-on synthesis work in small groups, each led by an experienced iDiv researcher. Working on genuine scientific projects, the participants implemented their newly learnt skills by collecting and analysing data and taking the first steps toward writing a joint scientific paper. “I liked working in a mixed group of people from different backgrounds”, says Danielle Petch, who is conducting her doctoral thesis at the Federal University of Goiás in Brazil. “We were able to work together in teams in which we complemented each other’s strengths in a really good way” adds Martin Jung from the University of Sussex, “it was a very productive experience with lessons learnt that we can also use after the summer school”. Mari BieriFurther information: Dr Mari Bieri
Coordinator of yDiv - research training group
Web: https://www.idiv.de/de/gruppen_und_personen/mitarbeiterinnen/mitarbeiterdetails/eshow/bieri-mari.html
« back to Archive 2017
Share this site on: