A looming tragedy of the sand commons 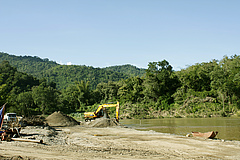 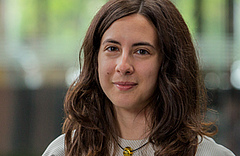 Sand and gravel are the most extracted group of materials world-wide, exceeding fossil fuels and biomass. In a new paper in “Science”, researchers assess the negative consequences of sand mining and transport on biodiversity and ecosystem services. In this interview, first author Dr Aurora Torres, scientist at iDiv and the Martin Luther University Halle-Wittenberg, explains why sand trade is a growing but still largely under-estimated global problem.Question: Dr Torres, in your paper, recently published in Science, you describe how sand mining and sand transport is associated with a number of problems for biodiversity and ecosystem services. What are the most important ones? Torres: Given the magnitude of the extraction, with sand and gravel being the most extracted resources in the world, there are many impacts of sand mining. When considering direct effects of extensive sand mining alone, the most important problems are increased erosion and compromised ecological integrity and water quality. As a result, sand mining has become a serious threat for biodiversity. For example, the gharial (Gavialis gangeticus) is a critically endangered crocodile living in Asian rivers that is increasingly threatened by sand mining. This species basks preferably in sand banks, which are destroyed or eroded by mining. Beyond biodiversity loss, the erosion and degradation of the environmental system have major cascading impacts on human well-being, because freshwater and coastal systems provide a range of critical ecosystem services that people depend upon – from protection to natural hazards such as storms or tsunamis to the provision of food and water. Damage to these services has been evidenced for example in Sri Lanka or the Mekong delta.   Question: Do you feel that people are aware of these complex problems? Torres: Absolutely not. As with many natural resources the society depends upon, sand is a perfect example of transactions that seem simple, but in reality, are deeply complex and rife with inequity and risk. The thought of sand spread all over beaches or endless deserts makes it difficult for us to think of sand as a common pool resource prone to “tragedies of the commons”. Although the general public is still mainly oblivious, the environmental and human effects of sand mining are gaining attention and in the last couple of years this topic has caught the interest of international organisations (e.g., UNEP) and is beginning to attract the interest of global media (e.g., The New York Times, The Guardian, The Economist). Also, an internationally awarded documentary film has been dedicated to the conlicts posed by sand mining (“Sand Wars”). However, the complexity of this issue is not yet fully recognised or understood and the scientific literature has been lagging behind the media coverage. In this context, my co-authors and I are launching the first international systematic effort to examine the scope of sand supply and demand through a system integration approach, i.e., integrating the environmental and socioeconomic interconnections of sand mining, trade, and consumption. Question: Sand demand and sand mining are highly variable among regions. Do we have a clear picture of how much sand is being mined, transported and used on a global level? Torres: The global extraction of sand used for construction was ca. 11 billion tonnes in 2010 according to studies published last year, with extraction rates being the highest by far in the Asia-Pacific region, followed by Europe and North America. However, sand is also consumed for beach re-nourishment programs, shale gas extraction, and manufacturing of many products like electronics. In addition, illegal extraction is difficult to curb and sand is a high-volume low-value resource that tends to be under-reported in economic statistics. These numbers are therefore a gross underestimation of global sand extraction and use. Regarding global sand trade, the trade value of sand skyrocketed almost six fold in the last 25 years (UN Comtrade database) and sand is becoming an increasingly globalised commodity, with the US dominating the global exports and Singapore leading the global sand imports.   Question: Sand demand will most likely increase in the future. How can an exacerbation of associated problems be avoided? Torres: We are still in a very early stage of understanding this complex issue, the actors involved and the implications for global environmental and sustainability challenges, and therefore it is hard to anticipate solutions.  But some things can be done from now: First, increase the efficiency of sand consumption, with a strong pushing for recycling policies and strategies that avoid waste along the supply chain. Second, make a responsible consumption by paying more attention to the long-distance interactions involved in sand supply and demand. The impacts of sand mining are commonly not perceived in the consumption place (e.g., urban regions), but rather in the poorer regions where mining occurs. Third, establish rigorous controls on planning, permission, prospecting, extraction, and monitoring for the mining industry.  Question: What is the role of science in this context?

Torres: Sand sustainability is a very complex and under-researched issue with a great potential for research advancement. A grand challenge of the 21st century is to build a global governance strategy for sand to avert disasters. Policies and strategies on sand sustainability are more likely to succeed if they are based in science. We encourage further research that provides detailed knowledge of global and regional sand budgets (how much sand is consumed versus how much sand is replenished through natural processes), as well as research that applies system integration approaches to unravel the complex relationships between sand scarcity, associated flows, and environmental and human impacts. Understanding what happens at the places sand is mined, the places sand is used and the many points in between which experience loss, benefits or harm is fundamental to achieve realistic assessments of the sustainability of sand extraction and trade.