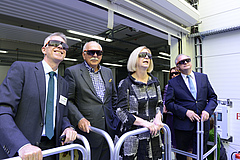 Federal Minister Wanka, Minister President Haseloff and President of the Leibniz Association Kleiner with Altmann, director of the plant phenotyping of the IPK, at the opening of the plant cultivation hall of the IPK in Gatersleben (photo: Markus Scholz).

The Leibniz Institute of Plant Genetics and Crop Plant Research (IPK) has opened a new plant cultivation hall in Gatersleben to better study the productivity of crop plants under changing environmental conditions. The Minister President of the State of Saxony-Anhalt, Dr. Reiner Haseloff, the Federal Minister for Education and Research, Prof. Johanna Wanka, and the President of the Leibniz Association, Prof. Matthias Kleiner, emphasized the importance of this worldwide unique facility for the expansion of research infrastructures in Germany, Europe and beyond. IPK Gatersleben is one of eleven universities and research institutes in the iDiv consortium. IPK and iDiv are among others connected by a junior research group on domestication genomics.

Read more in German in the press release of IPK.