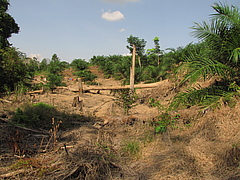 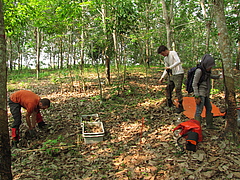 Researchers collecting invertebrates from the leaf litter on one of the research plots in a rubber plantation. (photo: Andrew Barnes)

Scientists have conducted a large-scale study in Indonesia to understand how the conversion of rainforest to rubber and oil palm plantations alters biodiversity of these ecosystems. The researchers found that land-use change directly reduces the number of different species as well as the number of individual plants and animals, especially at the highest trophic levels, and that interactions among different organisms control how the whole ecosystem responds to land use. The study was published in Nature Ecology and Evolution. Among the authors are also scientists from iDiv, Leipzig University and the Friedrich Schiller University Jena. Tropical rainforests are under threat from the human demand for natural products like vegetable oils and rubber, which are found in food and common household products around the world. The demand is driving the conversion of tropical biodiversity hotspots to agricultural plantations, and over the past two decades, deforestation rates in South-East Asia have rapidly increased. This has profound consequences for biodiversity, affecting, for example, plants, insects and birds. These different organisms constantly interact with each other, especially through trophic interactions, like when insects eat plants or birds eat insects. Because of these interactions, when one group of organisms is affected by deforestation, this may have negative consequences for another group as well. Ultimately, trophic interactions can determine how whole ecosystems respond to disturbances. The Göttingen researchers investigated the direct and cascading effects of land-use change in Sumatra by collecting data from a range of organisms, among them plants, bacteria, invertebrates and birds. Their research plots were located in rainforest, areas of rubber trees mixed with forest tree species (“jungle rubber”) and monoculture rubber and oil palm plantations. The researchers found that species diversity was as much as 65 percent lower on the study plots in monoculture plantations compared to rainforest plots. This was due to direct effects like higher mortality of insects due to the use of toxic pesticides in plantations, and also to indirect effects which occur through the disruption of organisms at lower trophic levels that serve as resources for organisms higher in the food chain. For example, they found reduced species diversity of invertebrates that eat leaf litter (such as millipedes and cockroaches) in plantations, which then impacted the predators that rely on these invertebrates for food, like spiders. “Essentially, we found that responses of ecosystems to land-use change are highly complex when we look at many taxonomic groups simultaneously,” explains lead author Dr Andrew D. Barnes – now scientist at the German Centre for Integrative Biodiversity Research (iDiv) and Leipzig University. Dr Kara Allen, the other lead author, points out: “Our results provide important insight into how whole ecosystems react to human disturbances. However, they also suggest that we still have much to learn about how high-diversity systems operate.” The study also revealed other interesting trends: It has often been shown that larger-bodied species at higher trophic levels, such as predatory birds or tigers, tend to be the first to go extinct when natural ecosystems are disturbed by humans. The researchers were able to confirm this theory – the highest trophic levels were indeed the most strongly affected because of the combination of their reliance on organisms at the lower trophic levels for food, along with the simultaneous direct impacts of land-use change. “By pointing to groups that will have the most impact on ecosystem-level conservation, these sorts of insights should help to better inform conservation management decisions,” says Prof Ulrich Brose, senior author of the study. Brose has moved to Leipzig and is now head of the research group “Theory in Biodiversity Science” at the German Centre for Integrative Biodiversity Research (iDiv) and the Friedrich Schiller University Jena. The study was conducted within the collaborative research centre “Ecological and Socioeconomic Functions of Tropical Lowland Rainforest Transformation Systems (Sumatra, Indonesia)” (EFForTS), a larger collaboration between the University of Göttingen and several Indonesian universities funded by the German Research Foundation (DFG). Further information can be found online at www.uni-goettingen.de/en/310995.html. Original publication:
Andrew D Barnes, Kara Allen et al. Direct and cascading impacts of tropical land-use change on multi-trophic biodiversity. Nature Ecology and Evolution 2017. Doi: 10.1038/s41559-017-0275-7. http://nature.com/articles/doi:10.1038/s41559-017-0275-7Contact:
Dr. Andrew Barnes
German Centre for Integrative Biodiversity Research (iDiv) Halle-Jena-Leipzig
Leipzig University
Phone: +49 341 9733-122, Email: andrew.barnes@idiv.de
Internet: www.idiv.de/en/groups_and_people/employees/details/eshow/barnes-andrew.html Dr. Kara Allen
West Virginia University
Department of Biology
Email: kara.allen@mail.wvu.edu
Internet: www.researchgate.net/profile/Kara_Allen2 Prof. Dr. Ulrich Brose
German Centre for Integrative Biodiversity Research (iDiv) Halle-Jena-Leipzig
Friedrich Schiller University Jena
Phone: +49 341 9733-205, Email: ulrich.brose@idiv.de
Internet: www.idiv.de/en/groups_and_people/employees/details/eshow/brose-ulrich.html
« back to Archive 2017
Share this site on: