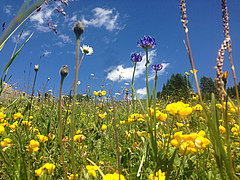 Temperate grasslands of Europe are incredible hotspots of biodiversity and are key habitats of conservation concern. Many are in decline and require ecological restoration for habitat improvement (photo: Emma Ladouceur). 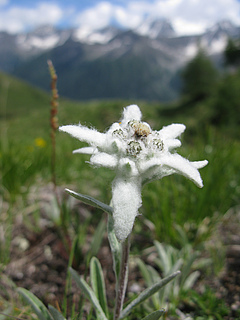 Leontopodium alpinum is an indicator species of calcareous alpine grasslands, and is available from approximately 6% of seed producers across Europe (photo: Emma Ladouceur). 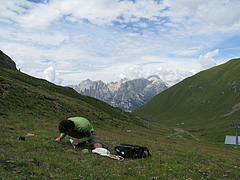 Collecting a biodiverse mix of native seed by hand is not an option for most ecological restoration projects (photo: Emma Ladouceur).

Leipzig/ Halle/ Trento (IT). Ecological restoration aims to recover damaged ecosystems. It relies on the supply of seeds from native plants, and the farming of these seeds is emerging as a developing market. However, at present only a small proportion of plant species relevant to the restoration of grasslands in Europe can be purchased as seed a new study in Conservation Letters found.

The study was supervised by Borja Jiménez-Alfaro, who is a researcher at the iDiv research centre and the Martin Luther University Halle-Wittenberg, and led by Emma Ladouceur, a researcher at MUSE - Science Museum (Trento, Italy). Together with their colleagues, they have identified over 1.000 species which are important for the restoration of grasslands in Europe. They found that only for 32% of these species there are seeds available on the market along with information about how to make them germinate. The latter is important because in some cases companies can store seeds from native species, but if they do not know their germination requirements, they cannot use them or produce high quantities to be commercialized. “This is unfortunate, because with only a limited set of native species available, restoration projects may fail to reinstate functioning ecosystems”, says Jiménez-Alfaro. “And we also need to consider that the real number of seeds available is much lower at the country level and for protected species, which means that there is an insufficient reservoir of seeds and germination protocols to reintroduce endangered plants”. Therefore, seed supply and related scientific research have to be improved.

To this end, the study authors proposes to substantially expand research and development on native seed production, to increase open-source knowledge transfer between public, private and academic sectors and to create supportive policies to stimulate the demand and production of diverse seeds in Europe. Ultimately, the scientists argue, there is also great economical potential, as seed production is a promising industrial field.

The study was carried out within the NASSTEC project (Native Seed Science, Technology & Conservation Initial Training Network), which is coordinated by MUSE and is part of the European Union’s Research and Innovation Programme FP7.