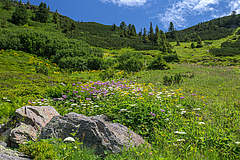 Oldenburg. Assessing the state of an ecosystem solely on the basis of short-term changes in the number of different species it contains can lead to false conclusions. This is the conclusion reached by an international team including researchers of the Helmholtz Institute for Functional Marine Biodiversity (HIFMB) at the University of Oldenburg and the German Centre for Integrative Biodiversity Research (iDiv). In order to assess ecosystems in a way that is meaningful for nature conservation, experts should instead focus on analysing the turnover of species within a system. The researchers reached this conclusion using a mathematical model and environmental data analysis. The new method can be applied effectively using data already available from environmental monitoring programmes. The study is published online in the "Journal of Applied Ecology". A growing number of species are under threat of extinction – in particular due to global environmental changes. Political instruments such as the International Convention on Biological Diversity or the EU's Marine Strategy Framework Directive aim to mitigate this biodiversity crisis. In practice, taking the number of species (species richness) as a simple metric for determining the state of an ecosystem seems an obvious approach. "But this metric has its pitfalls because it doesn't fully reflect the changes in the system," says the Oldenburg biodiversity expert Hillebrand, who is also the lead author of the study. On the contrary, according to the scientists' model calculations, negative influences on an ecosystem do not automatically result in a reduction in species richness. Conversely, the number of species in a system does not automatically increase as soon as an ecosystem recovers from human impact. The reason for this is: "Species richness is a result of the balance between the immigration and the extinction of species." However, these two processes do not occur at the same speed, Hillebrand explains. A few individuals of a species can quickly migrate into a local habitat and colonise it, but it may take several generations for a species to be replaced by a new, more competitive species, or to die out as a result of changed conditions. " This means you can't reliably say, on the basis of short-term trends, whether more or fewer species will be left in an ecosystem over a long period of time," Hillebrand stresses, adding: "So species richness can be a false friend." In their publication the scientists therefore recommend closer monitoring of how many species are migrating into a system, how many are leaving it, and how many species are becoming more or less abundant within the system. As an example the scientists used this method to analyse long-term measurements from various ecosystems - such as data on drifting microalgae (phytoplankton) from the mud flats of the Dutch Wadden Sea and the lakes of North America, as well as data from grassland ecosystems on six different continents. “In extreme cases, the majority of species in an ecosystem could be replaced by new species. But if you only look at the number of species, the so-called species richness, that number doesn’t change at all”, says Prof. Dr. Jonathan Chase of the German Centre for Integrative Biodiversity Research (iDiv) and the Martin Luther University Halle-Wittenberg. “Therefore, species richness alone can be a misleading metric and can obscure what is really going on in an ecosystem.” For their analyses the researchers explicitly used data gathered by conservationists in environmental monitoring programmes. In this way the scientists want to ensure that their tool can be used with the available resources, which in practice are often limited. "We hope that in this way we can build a bridge between the basic research and nature conservation in practice," Hillebrand says. Original publication Helmut Hillebrand, Bernd Blasius et al. (2017). Biodiversity change is uncoupled from species richness trends – consequences for conservation and monitoring. Journal of Applied Ecology. DOI: 10.1111/1365-2664.12959
http://dx.doi.org/10.1111/1365-2664.12959ContactProf Helmut Hillebrand
Professor, Pelagic Ecology
Institute for Chemistry and Biology of Marine Environments [ICBM]
Carl-von-Ossietzky University Oldenburg
Web: https://www.icbm.de/en/planktology/staff/helmut-hillebrand/Prof Stanley Harpole
Head of research group Physiological Diversity at the German Centre for Integrative Biodiversity Research (iDiv) and Martin Luther University Halle-Wittenberg
Web: https://www.idiv.de/en/groups_and_people/employees/details/eshow/harpole-stan-w.htmlDr Constanze Böttcher
Carl von Ossietzky Universität Oldenburg
Press and Communications
Web: http://www.uni-oldenburg.de/en/press/
« back to Archive 2017
Share this site on: