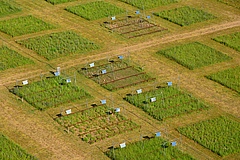 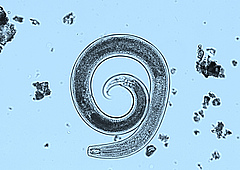 A predatory female nematode under the microscope (photo: Marcel Ciobanu). 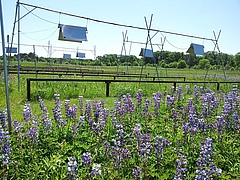 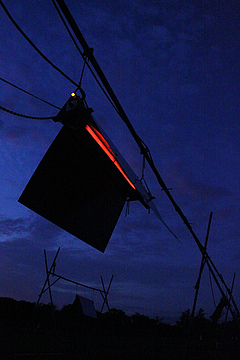 Leipzig, Minnesota. Climate change leads to loss of biodiversity worldwide. However, ecosystems with a higher biodiversity in the first place might be less affected a new study in Science Advances reports. An international research team found that when they experimentally warmed meadows, the diversity of nematode worms living in the soil went down in monocultures, whereas the opposite was true for meadows with many different herbaceous plant species. The last month was recorded as the warmest June ever in many parts of the world. Last year, 2016, was the warmest year in the modern temperature record. Our planet is constantly heating up. This poses direct threats to humans, like extreme weather events and global sea-level rise, but scientists are concerned that it may also affect our well-being indirectly via changes in biodiversity. The variety of life, from plants and animals to microorganisms, is the basis of many services ecosystems provide to us, for example clean drinking water or food. Today, ecologists are challenged by the question: what does a warmer world mean for biodiversity? More species, less species, or no change? A team of ecologists from the German Centre for Integrative Biodiversity Research (iDiv), Leipzig University, and the University of Minnesota found that climate warming can both increase and decrease biodiversity, and that the direction of the effect depends on how much biodiversity there is in the first place. In a long-running field experiment in Cedar Creek, Minnesota, the researchers established more than 30 different meadow plots, some with only one plant species (monocultures), and others with up to 16 different plant species. Then, they warmed the meadows with heating lamps to approximately 3°C above the ambient temperature. Subsequently, the researchers recorded how this affected nematodes, little worms that live in the soil in high abundance and of which many different species exist. Nematodes play important roles for several ecosystem functions, for example they help to make the soil fertile which is crucial for plant production. When the researchers warmed the monoculture plots, the diversity of nematodes substantially declined. However, when they warmed the plots with a high number of different plant species, the number of nematode species increased. Dr Madhav P. Thakur, the lead author of the study and a postdoctoral researcher at the iDiv research centre and the Leipzig University, says: “The story is simple; you need biodiversity to conserve biodiversity in a warmer world”. That’s not, however, the end of the story. The researchers also report the limitation of biodiversity in rescuing biodiversity in a warmer world. While they did find a greater number of nematode species in the warmed plots with high plant diversity, those nematode species were also more closely related, or in other words, more similar, to each other. “The reason was that these species had all been selected for a common characteristic, namely tolerance to a warmer environment“, Thakur explains. This increase in similarity can have implications for how well biological communities can respond to future environmental changes, potentially limiting the “insurance” effect inherent in a higher numbers of species,” says Dr Jane Cowles, a co-author and postdoctoral researcher at the University of Minnesota. What will be the consequences for the stability of our planet’s ecosystems? The authors encourage future research to solve this puzzle. The monoculture meadow created for the experiment resembled meadows found in intensively managed agricultural land. These new research findings therefore support conservationists who are advocating for maintaining species-rich ecosystems and farmland to sustain biodiversity, and thus human well-being, in a warmer world. This may help to prevent negative effects of climate warming, although likely with some limitations. Publication M. P. Thakur, D. Tilman, O. Purschke, M. Ciobanu, J. Cowles, F. Isbell, P. D. Wragg, N. Eisenhauer (2017): Climate warming promotes species diversity, but with greater taxonomic redundancy, in complex environments. Science Advances 3, e1700866. DOI: 10.1126/sciadv.1700866. ContactDr Madhav P. Thakur
Postdoctoral researcher at the research group Experimental Interaction Ecology at the German Centre for Integrative Biodiversity Research (iDiv) and at Leipzig University
Tel. +49 341 9733193
Web: https://www.idiv.de/en/groups_and_people/employees/details/eshow/thakur-madhav-prakash.html  Dr Tabea Turrini
iDiv Media and Communications
Web: https://www.idiv.de/en/groups_and_people/employees/details/eshow/turrini-tabea.html
« back to Archive 2017
Share this site on: