Islands and coastal regions are threatened the most 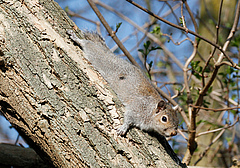 The Gray Squirrel (Sciurus carolinensis) displaces the native European Squirrel (Sciurus vulgaris) in the United Kingdom and other EU countries. It was therefore included in the blacklist of the EU ("List of invasive non-resident species of Union concern") in 2016 and must be actively combated in the European Union. Photo: Tim M. Blackburn, University College London 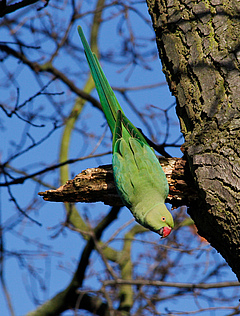 An international team consisting of 25 researchers under the leadership of Dr Wayne Dawson from the University of Durham (United Kingdom), who began his research on this topic at the University of Konstanz, created a database for eight animal and plant groups (mammals, birds, amphibians, reptiles, fish, spiders, ants and vascular plants) that were found to occur in regions outside of their original habitat. The study of the distribution of these species led the research team to identify 186 islands and 423 mainland regions in total. This project allowed the researchers to illustrate the global distribution of established alien species within a large number of organism groups for the first time.

Most important result: The highest number of alien species can be found on islands and in the coastal regions of continents. The island of Hawaii was found to have the most alien species, followed by the north island of New Zealand and the small Sunda Islands of Indonesia. The researchers also examined the factors responsible for the number of alien species in any one region. Lead author Dr Wayne Dawson, from Durham University’s Department of Biosciences, said: “Our research shows that, islands and mainland coastal regions contain higher numbers of established alien plants and animals, and this may be because these areas have major points of entry like ports. In general, regions that are wealthier, and where human populations are denser also have more alien species, but these effects are stronger for islands.” These factors increase the likelihood of humans introducing many new species to an area. This results in the destruction of natural habitats, which in turn allows non-indigenous species to spread. Islands and coastal regions seem to be particularly vulnerable because they occupy leading roles in global overseas trade.

“Hawaii and New Zealand lead the field for all examined groups”, explains participating ecologist Dr Franz Essl from the University of Vienna: “Both regions are remote islands that used to be very isolated, lacking some groups of organisms altogether - such as mammals, for instance. Today, both regions are economically highly developed countries that maintain intense trade relationships. These have a huge impact on the introduction and naturalisation of non-indigenous species”.

The presence of large numbers of alien species across many regions of the earth comes with serious consequences, especially in cases where indigenous species are driven out and natural habitats are changed. This is very problematic with regard to islands since many indigenous species tend to exist only on the island itself and are therefore particularly vulnerable to the threat of alien invaders. "Islands, such as New Zealand and Hawaii, are often geographically isolated and have, in evolutionary terms, unique flora and faunas, which were not at all prepared for the most diverse types of entrained species," explains the ecologist Marten Winter of iDiv. Various laws and treaties designed to reduce the spread of alien species have been passed around the globe. "That is precisely the reason the Cross-border cooperation in Europe, which has now begun with the EU regulation on invasive species, is important and necessary," says Winter. New Zealand has already passed comprehensive legislation designed to prevent the introduction of further alien species over the past few years. And on some smaller islands, alien predators such as rats or mice have been successfully eliminated. These examples show that it is possible to take successful action. Original publication: W. Dawson, D. Moser, M. van Kleunen, H. Kreft, J. Pergl, P. Pyšek, M. Winter, B. Lenzner, T. Blackburn, E. Dyer, P. Cassey, S. Scrivens, E. Economo, B. Guénard, C. Capinha, H. Seebens, P. Garcia-Diaz, W. Nentwig, E. Garcia-Berthou, C. Casal, N. Mandrák, P. Fuller, C. Meyer, and F. Essl (2017): Global hotspots and correlates of alien species richness across taxonomic groups. Nature Ecology and Evolution. DOI: s41559-017-0186
http://nature.com/articles/doi:10.1038/s41559-017-0186
The study was supported by the European Commission (COST Action TD1209), the German Science Foundation (DFG), the Volkswagen Foundation through a Freigeist Fellowship and others.Links: