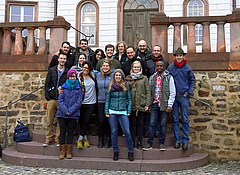 The participants of the yDiv Retreat 2016

Every year the yDiv retreat invites the doctoral researchers of yDiv to engage with an important topic related to working in science. This year’s retreat took place from 24 to 25 October 2016 in Colditz and revolved around “Science communication”. The theme was selected at the retreat last year to address the more and more pressing question for scientists of how to communicate their research to a wider and also non-scientific audience.

At the historic Colditz castle, about an hour south of Leipzig, the participants had the opportunity to learn “hands-on” how to talk about their research depending on the audience. In a tailor-made interview training led by Volker Hahn, the head of public relations at iDiv, the doctoral researchers slipped into the roles of interviewer and interviewee. One of the lessons learned was to keep it short and to avoid specialist terms by using a more commonly understandable language when addressing an audience outside of the scientific context.

The second focus of the workshop was put on debating techniques. Debating specialists Pascal Schaefer and Lucas Wotzka from “Streitpunkt Leipzig”, the Leipzig University debating club, could provide a valuable insight into argumentation strategies and preparation. The participants put these to test afterwards, as “Streitpunkt Leipzig” had three debating exercises prepared for them. Speaking up in front of a group and arguing for opinions you may not share, felt a little awkward to the participants, but everyone valued the practice as very useful and fun in the end.