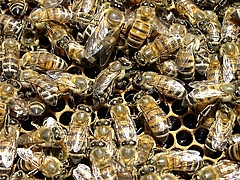 Halle (Saale). The proteins in the larval food of honeybees are not specific determinators to make the larvae grow into queens – that includes the protein royalactin, which had been previously claimed to be the "queen determinator" in a highly regarded study in 2011. This is the conclusion of a study carried out by researchers at Martin Luther University Halle-Wittenberg (MLU) and published in the internationally renowned journal "Nature". iDiv member Prof Robin F. A. Moritz was also involved in this study.

Read more in the press release of the MLU: http://pressemitteilungen.pr.uni-halle.de/index.php?modus=pmanzeige&pm_id=2628