A plan for a new generation of scenarios for IPBES 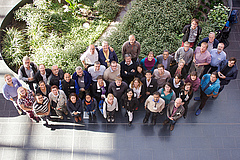 More than 40 scientists, NGO and government representatives and other stakeholders from all over the world participated in the IPBES workshop at iDiv. Photo: Stefan Bernhardt, iDiv

The IPBES workshop on scenarios and modelling that was held last week at iDiv in Leipzig brought a paradigm change, the organizers say. Scenarios have always treated impacts on biodiversity as a consequence, however, the workshop participants advocate to reverse this approach for biodiversity scenarios. They developed a framework that sets a vision of desired states of biodiversity as starting points for models. “What kind of biodiversity do we want to have in 50 years? The first step in our framework is to define the desired outcomes, and in a second step we will develop storylines that help us understand how we can get there”, says Henrique M. Pereira, Professor at iDiv and the Martin Luther University of Halle-Wittenberg, who organized the workshop together with Postdoctoral researcher Isabel M.D. Rosa, and the team from IPBES’s Technical Support Unit at PBL, Netherlands. “At the heart of our work is the fact that the impact of humans on biodiversity is not a one-way-street”, Rosa adds. “Biodiversity is closely linked to ecosystem services, i.e. the benefits nature provides us with, and thus to our society, economy and wellbeing. Therefore, how we deal with biodiversity feeds back into the system, and we need to close this loop in scenario development. This was the basis for creating a path in our workshop to put nature at the center of future scenarios”.

The IPBES committee now plans to bring different stakeholders together and explore their visions for desired states of future biodiversity. For example, many arable crops need to be pollinated, and a farmer who relies on bees and other insects for his business will find it crucial to have them around. The interests of, for example, local municipalities, managers of protected areas, indigenous communities, or national governments may or may not match with the farmer’s interests. But only if the scientists are aware of the range of visions for biodiversity and ecosystem services present in society, they can appropriately model according scenarios, the workshop organizers claim. The ongoing regional assessments of the IPBES will play an important role in this process, and the scenarios and modelling group also plans to invite different stakeholders to their next workshop taking place in the summer of 2017. Further, with this set of scenarios it will possible to understand how the Sustainable Development Goals, particularly those related to biodiversity, can be achieved before 2030.

The scenarios of the IPCC (Intergovernmental Panel on Climate Change) have been out now for over a decade, and there are many parallels to the biodiversity scenarios that are currently being developed within the IPBES working group. “The IPCC trajectories are now well accepted and picked up by decision-makers, and this is what we also want to achieve with our biodiversity scenarios”, Rosa explains. Different biodiversity scenarios could, for example, range from allowing extensive wild nature to controlling nature heavily and keeping it tamed. “One part of our work is and will be integrating biodiversity into the existing IPCC models that develop different scenarios of how the future will be under certain assumptions with respect to, for example, population growth or GDP. But starting from the desirable future, namely from a vision of what we want to achieve, is another important part of our work.” By 2020 the researchers aim to have multiscale and multi-sectorial biodiversity scenarios in time to support the next generation of regional and global assessments of biodiversity from IPBES. Tabea Turrini