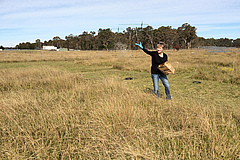 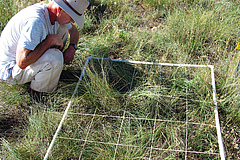 Itiswell-establishedthattheadditionofnutrientsingrasslandecosystems - boththroughfarmingandatmosphericdeposition - reducesplantdiversity. Now, aninternationalstudyissheddingnewlightonhowthislossinbiodiversityisdrivenbymorefactorsthanpreviouslythought. Thisfindinghasstrongimplicationsforunderstandingandpredictingfutureeffectsofmultipleglobalchanges. ResultsarepublishedinNATURE, September 1 issue. Species diversity is often explained by each species having some unique niche, that is, a way of being different from other species so that they don’t compete as strongly with each other. A global network of scientists with strong ties to the Helmholtz Centre for Environmental Research (UFZ), the German Centre for Integrative Biodiversity Research (iDiv) and the Martin Luther University Halle-Wittenberg (MLU) now has tested two very old ideas in ecology that relate to the number of resources - various nutrients and light - which plants need for growth and how these “resource niches” determine species diversity. In short, the theory tested was that the diversity of resources determines the diversity of species. The problem of niches for plants is that plant species share all the same nutrients, chemicals like nitrogen, phosphorus, and potassium, and there are not that many. Even more problematic is that there has been a belief dating back to the late 1800’s that plants are only ever limited by a single nutrient at a time. This means that there shouldn’t be many ways for plants to have unique nutrient niches. What researchers from the global Nutrient Network (NutNet) consortium now found, seems to be a paradox: some of the 45 study sites show more than 30 plant species in a single square meter of grassland. If there was only one limiting nutrient and thus only one nutrient niche, how can such a high species diversity be explained? The other long-standing belief is that if one adds nutrients, additional plant growth creates dense shade that makes light become the new limiting factor. Only few species can sucessfully compete for this resource - by growing strongly and shading out others. As a result, less light-competitive species go extinct and biodiversity decreases. “This is basically the same underlying idea that there is only one factor that is important at one place and time”, says Stan Harpole (UFZ/iDiv/MLU), first author and leading PI of the NutNet consortium). To test both old beliefs, Stan Harpole and his colleagues added various combinations of nutrients on 45 study sites of the Nutrient Network ranging across six continents. Experimental plots contained anywhere from 13 to 103 plant species. “What we found in our experiments is that these old beliefs are not accurate. Instead, plant growth depends on many resources at the same time, not just one.” Fertilization at the NutNet sites did decrease light levels as expected, but this didn’t explain all of the diversity loss observed. It turned out in every analysis that the number of resources added had a significant effect; by adding a resource the researchers made it no longer scarce and they essentially removed a niche that some species might specialize on. For example, some species are presumably better competitors for nitrogen while others for phosphorus and others for light. Adding nitrogen, phosphorus, and potassium caused more plant growth and increased shading, giving an advantage to the species that are best adapted to growing under lower light conditions. This part is consistent with standard thinking, but it wasn’t the whole story. About 1 in 3 grassland sites did not show any increase in plant growth with fertilization — other factors like herbivores or diseases might have been important, but these weren’t measured.  What was interesting was that when fertilizing these grasslands, diversity was lost even though there was no shift towards decreased light. What this means is that species diversity depends partly on plants specializing in different ways on at least three different soil nutrients, and when some nutrients become no longer scarce this causes some species to lose out and others to win. “In other words,” says Harpole, “we need to think about ecological systems in a multi-dimensional way. Rather than thinking about only one main controlling factor, like nitrogen, as being most important, we should be considering the many factors that are interacting with each other in complex ways. The take home message is that ecological systems are extremely complex and we need to grapple with their dimensionality, or the number of interacting factors in order to understand their diversity and functioning.” Co-author Jonathan Chase, professor at iDiv and MLU explains the practical importance of the new study: “We are currently adding large amounts of nutrients to our grassland ecosystems, both through intentional fertilization, but also through atmospheric deposition from burning of fossil fuels. These excess nutrients are reducing the number of plant species at rates never observed before. This study increases our understanding of the mechanisms behind this and our ability to predict the effects of multiple global changes.” ThroughacollaborationwithcolleaguesaroundtheworldassociatedwiththeNutrientNetwork, aninternationalnetworkofgrasslandresearchsites, StanHarpolegathereddatafromtheidenticallydesignedandsampledsetofexperimentsat 45 studysitesacrosssixcontinents. Plotscontainedanywherefrom 13 to 103 plantspecies. Theresultstranscendanysinglesetofenvironmentalconditions. Harpole, alongwithahalfdozenotherresearchers, co-foundedtheNutrientNetworkjustoveradecadeago. Thenetwork’smorethan 100 memberscollaborateonglobal-scalestudiesthatlookatvariousaspectsofnutrientcycletobetterunderstandhumanimpactongrasslandecosystems.Publication:
Addition of multiple limiting resources reduces grassland diversity. W. Stanley Harpole et al. Nature 2016, doi: 10.1038/nature19324
http://dx.doi.org/10.1038/nature19324Further information:
W. Stanley Harpole
UFZ, MLU and iDiv research group “Physiological Diversity“
phone: +49 341 973-3171 or +49 341 973-3152
E-Mail: stan.harpole@idiv.de
https://www.idiv.de/en/research/idiv_core_groups/physiological_diversity.htmlLink:
Nutrient Network: A global research cooperative: www.nutnet.orgPhotos:
1) Scientist spreading fertilizer on an experimental plot of the Nutrient Network (NutNet) in Yarramundi, Australia. Credit: Raul Ochoa Hueso
2) Scientist counting the number of species on a NutNet plot in Boulder Colorado, USA. Credit: Brett Melbourne
« back to Archive 2016
Share this site on: