Oldest plant genome to be reconstructed to date 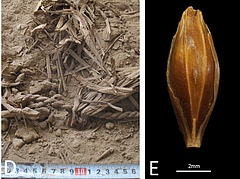 Gatersleben. An international team of researchers has succeeded for the first time in sequencing the genome of Chalcolithic barley grains. This is the oldest plant genome to be reconstructed to date. The 6,000 years old seeds were retrieved from Yoram Cave in the southern cliff of Masada fortress in the Judean Desert in Israel, close to the Dead Sea. Genetically, the prehistoric barley is very similar to present-day barley grown in the Southern Levant supporting the existing hypothesis of barley domestication having occurred in the Upper Jordan Valley.

Part of the research team was also Martin Mascher (head of the research group „Domestication Genomics“ at iDiv and IPK) and his colleagues of the Leibniz Institute of Plant Genetics and Crop Plant Research (IPK) in Gatersleben. The results are published in Nature Genetics (http://dx.doi.org/10.1038/ng.3611).

Read more in the press release of IPK: https://idw-online.de/en/news656351