How natural monocultures evolve in the rainforest 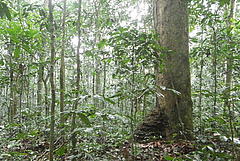 Gilbertiodendron dewevrei is one of the monodominant tree species from the tropical forests of Western and Central Africa. Photo: X. van der Burgt, RBG Kew.

Leipzig. Tropical rainforests are richer in species than any other area on earth. In spite of this diversity, there are large areas in which one species of tree dominates. Scientists have now developed a computer model to explain this phenomenon, which is called “Monodominance“: One species of tree can naturally dominate a forest over centuries, if it invests more in the weight of its seeds than the competition and if these seeds are also dispersed across a shorter distance, write scientists from the German Centre for Integrative Biodiversity Research (iDiv), the Helmholtz Centre for Environmental Research (UFZ) and the University of Oldenburg, in the Royal Society journal Interface.

In ecology, monodominance is identified as a condition in which at least 60%, or often even 90% of trees in a natural forest belong to the same tree species. We know of at least 22 species from eight families that create forest areas of this kind. How this is achieved is a mystery on which ecologists have speculated for decades. Gilbertiodendron dewevrei is one of the monodominant tree species from the tropical forests of Western and Central Africa, and is amongst the best researched species, even if there is no English name for it as yet. Its heavy timber is traded under the name Limbali. The evergreen tree from the Caesalpinioideae family can grow up to 45 metres tall and is primarily striking because of its fruit, which can grow up to 30 cm long and contain up to six seeds. The seeds are eaten by of the most diverse of mammals including lowland gorillas, although they host poisonous compounds. For this reason, they are only roasted, cooked or made into porridge by the people of Central Africa during periods of food shortage. Compared with the seeds of other tropical trees, which generally weigh less than one gram, the seeds of the G. dewevrei, are extremely heavy at 20 grams and are therefore not transported by wind, but usually remain within a radius of six metres from the mother tree. As a result, the species propagates extremely slowly – about 100 metres in 200 to 300 years. Gilbertiodendron dewevrei then accounts for up to 90% of the canopy, obstructing the growth of other species. In contrast, the seedlings themselves are highly tolerant to shade, and can survive under the old trees until they die out and make room for new ones. In this way, other tree species are also replaced until G. dewevrei dominates areas measuring up to 100 square kilometres. For the purposes of the study, the team around Martin Kazmierczak and Pia Backmann created a computer model of a tropical forest measuring about 10,000 hectares with eight tree species. They then observed, in stages of one year, how the composition of the species developed with different variables such as distribution radius, mortality and seed mass. Although all eight species were initially distributed at random, after 10,000 years, clumps of a monodominant kind began to appear, whose trees were forming a certain number of clusters. The computer model developed by the team is, of their own admission, the very first to model the emergence of monodominance by testing alternative hypotheses to explain the phenomenon. This demonstrated that the clusters of the monodominant tree species accumulate and survive if this species is more invested in the seed mass than its neighbouring species. “Species like the ones we investigate must therefore invest around 50% more energy in their seeds than their competitors, which will be able to distribute their lighter seeds across longer distances”, reports Pia Backmann from UFZ and iDiv. “This strategy of forming clusters in one place is in fact a disadvantage to “globetrotters”, which disperse their seeds far and wide. However, if one species manages to eclipse its competitors in the truest sense of the word, and tolerate more shade than the others, then it will indeed prosper. As such, accumulations of a species are formed that slowly displace other species and establish monodominant areas. The phenomenon of monodominance could gain significance through human influence: Trees with large, heavy seeds mostly use animals for distribution. If this chain of logistics falters, however, because the carriers are depleted by humans, then the trees will be forced to settle and form clumps. “An important message from our results is thus: Through its activities, humanity not only reduces areas of tropical forests; it also changes their composition and ensures that they are less diverse than before,” summarises Backmann. Tilo ArnholdPublication:
Martin Kazmierczak, Pia Backmann, José M. Fedriani, Rico Fischer, Alexander K. Hartmann, Andreas Huth, Felix May, Michael S. Müller, Franziska Taubert, Volker Grimm, Jürgen Groeneveld (2016): Monodominance in tropical forests: modelling reveals emerging clusters and phase transitions. J. R. Soc. Interface 2016 13 20160123; DOI: 10.1098/rsif.2016.0123. Published 6 April 2016
http://dx.doi.org/10.1098/rsif.2016.0123
The study was founded by the European Research Council (ERC advanced grant no. 233066) and the German Research Foundation (DFG-FTZ 118).Further Information:
Pia Backmann
German Centre for Integrative Biodiversity Research (iDiv) & Helmholtz Centre for Environmental Research (UFZ)
Phone: +49-(0)341-235-1016
https://www.idiv.de/en/the-centre/employees/details/eshow/backmann-pia.html & http://www.ufz.de/index.php?en=36521
as well as
Volker Hahn/ Tilo Arnhold, iDiv Public Relations
Phone: +49-(0)341-9733-154, -197
http://www.idiv.de/de/presse/mitarbeiterinnen.html
and
Susanne Hufe, UFZ Public Relations
Phone: +49-(0)341-235-1630
http://www.ufz.de/index.php?en=36336Links:
The saplings go their own way - A new explanation for the dominance of generalists among tropical trees (UFZ Press release, 9 September 2014)
https://www.ufz.de/index.php?en=35283
The Young Biodiversity Research Training Group – yDiv
https://www.idiv.de/en/ydiv.html
Gilbertiodendron dewevrei
http://www.kew.org/science-conservation/plants-fungi/gilbertiodendron-dewevrei-abeumAbout the German Centre for Integrative Biodiversity Research (iDiv) iDiv is a central facility of the University of Leipzig within the meaning of Section 92 (1) of the Act on Academic Freedom in Higher Education in Saxony (Sächsisches Hochschulfreiheitsgesetz, SächsHSFG). It is run together with the Martin Luther University Halle-Wittenberg and the Friedrich Schiller University Jena, as well as in cooperation with the Helmholtz Centre for Environmental Research – UFZ. The following non-university research institutions are involved as cooperation partners: the Helmholtz Centre for Environmental Research – UFZ, the Max Planck Institute for Biogeochemistry (MPI BGC), the Max Planck Institute for Chemical Ecology (MPI CE), the Max Planck Institute for Evolutionary Anthropology (MPI EVA), the Leibniz Institute DSMZ–German Collection of Microorganisms and Cell Cultures, the Leibniz Institute of Plant Biochemistry (IPB), the Leibniz Institute of Plant Genetics and Crop Plant Research (IPK) and the Leibniz Institute Senckenberg Museum of Natural History Görlitz (SMNG). https://www.idiv.de/en.html
« back to Archive 2016
Share this site on: