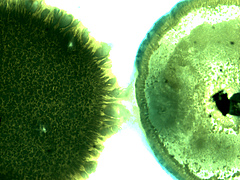 Utrecht. The extinction of species may slow down or prevent the evolvement of new species, while evolution just then is needed for the recovery of the disturbed ecosystem. This is the conclusion of the first experimental study on the effect of the loss of biodiversity on evolutionary processes. The study by biologist Alexandre Jousset from Utrecht University, conducted with German and French colleagues, is reported in Science Advances on 25 June. “Our results suggest that the extinction of species may have far more long-lasting and detrimental effects than currently assumed”, first author Jousset says. Also involved was Nico Eisenhauer of Leipzig University and iDiv.

“Our study shows that the extinction of species not only reduces current ecosystem functioning and services, but may induce an evolutionary debt as well. It can slow down or prevent the evolution of new species needed to compensate the functions of the ones which went extinct. And at least as important: it may prohibit the evolution of new species needed to adopt to novel challenges such as those associated with global climate change”, Alexandre Jousset, Assistant Professor at Utrecht University explains.

Read more in the press release of the Utrecht University: http://press.uu.nl/biodiversity-loss-prohibits-necessary-evolution-of-species/