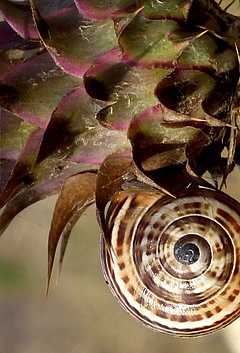 It has been hypothesized that globalization of human-mediated dispersal of species may break down biogeographic boundaries. However, empirical tests had been lacking until recently. An international research team has now discovered a comprehensive biogeographic reorganization for 175 species of alien gastropods across 56 countries. The data shows that homogenization is indeed happening. Geographic barriers to dispersal have fallen down but climate still limits how species colonize new areas. The study was published in the prestigious scientific journal Science. When the first explorers sailed around the world they found that the further away they traveled, the more different were the species and ecosystems they found. This happens because there are geographical barriers to dispersal. One of the main barriers to dispersal is the ocean. Therefore, species in the same continent share a common evolutionary history, but species in continents that have not been connected in the past or in the present have followed different evolutionary paths and have diverged. Humans and goods travelling over the last few centuries have lead, intentionally or, most often, unintentionally, to the dispersal of species to new places. This human-mediated dispersal has been hypothesized to homogenize biodiversity and perhaps change the biogeographic regions, but this hypothesis had never been tested globally. An international team of 5 researchers from Portugal, Austria and Germany tested the homogenization hypothesis by looking at 175 species of alien gastropods (snails) across 56 countries and subregions. For each location they compiled the list of alien species occurring there to obtain the global contemporary distribution of alien species – this is, the distribution of snails after human-mediated dispersal. The researchers then went to look at where these alien species were before the human-mediated dispersal. For each snail species they compiled the list of countries where they were native. The study comes in the wake of recent studies that could not find significant trends in biodiversity loss at the local scale over the last decades. “We therefore took a different angle. We didn’t test whether there has been species richness changes in communities over time. Instead we asked how is the similarity between species communities changing,” said Prof. Henrique Miguel Pereira from the German Centre for Integrative Biodiversity Research (iDiv) and Martin Luther University Halle-Wittenberg, senior author of the study. And the results were striking. “As expected, before human-mediated dispersal, similar communities were found within each major biogeographic region. But after human-mediated dispersal, the communities of aliens follow a completely new pattern and are organized into only two large biogeographic regions: tropics and temperate areas,” César Capinha, lead author of the study, explained. It follows that communities of species in temperate areas are more similar to other communities in temperate areas, independently of the continent where they are, and the same happens for tropical communities. Before, human-mediated dispersal, no species were shared by communities separated by more than 11,000km, and very few species were shared between communities separated by more than 6,500km. Now, even locations as far away as 20,000km can share a large number of species. In the past, geographical distance was the main factor determining the similarity. Now, climate is the major factor, with also a contribution of the distance and the amount of trade between countries, particularly the trade of goods that are vectors for the transport of snails, such as roof tiles, live plants, vegetables and fruits. This means that for similar climates, the stronger the trade of these products between two countries is, the more similar the species communities in those countries become. The new study is the first global analysis of how invasions are reorganizing biogeographic patterns which have evolved over millions of years, and provides evidence that major biodiversity changes are underway. The study confirms that homogenization is happening, but filtered by climate. Geographic barriers to dispersal have fallen down but climate still limits how species colonize new areas. This suggests that in the future, communities will become increasingly similar to any other community with a similar climate anywhere in the globe. The authors warn that this expansion of alien species also places pressure on native species, as alien species have caused more species extinctions than any other pressure during the last 500 years. Original publication:
César Capinha, Franz Essl, Hanno Seebens, Dietmar Moser, Henrique Miguel Pereira: The dispersal of alien species redefines biogeography in the Anthropocene, in: Science, 12 June 2015 For further information, please contact:
Henrique Miguel Pereira
German Centre for Integrative Biodiversity Research (iDiv)
Cell: +49 (0) 151 612 51644
hpereira@idiv.de César Capinha
REFER Biodiversity Chair, Portugal
ccapinha@cibio.up.ptPress Contact
Annette Mihatsch
Phone: +49 (0) 341 9733106
presse@idiv.deDownload press release (PDF)
« back to Archive 2015
Share this site on: