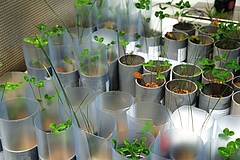 Food webs are characterized by the interplay between top-down (consumer controlled) and bottom-up (resource-controlled) forces. A recent study by a yDiv doctoral researcher, Madhav P. Thakur, revealed that the top-down control in an experimental model food web was regulated by plant community composition. Based on a microcosm experiment, Madhav P. Thakur and his PhD supervisor Prof. Nico Eisenhauer (EIE Group leader at iDiv) argue that high predator density does not necessarily suppress prey populations, but the effect depends on how different plant communities control the basal resource for the prey species. The authors highlight in the paper that understanding of interactive effects of predator density and basal resource availability mediated via plant community composition will increase the accuracy of predicting food web structure in a changing world.