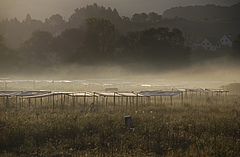 A recent study led by iDiv scientists revealed that plant diversity drives the biomass of soil microorganism irrespective of global environmental change factors, such as drought or eutrophication in grasslands. These conclusions resulted from the meta-analysis of 12 experiments across Europe, North America, and China.

The study further highlights the limited potential of plant diversity in buffering the effects of global change factors. “Understanding the key drivers of soil microbial biomass is crucial for improving our predictions of soil carbon dynamics in the changing world. This study is a step towards highlighting the need of including plant diversity in Earth system models, which predict future soil carbon scenarios”, says the lead author Madhav P. Thakur, a yDiv doctoral researcher.

The senior author of this research, Prof. Nico Eisenhauer added “We were surprised by the fact that no interactive effects between plant diversity and any of 5 considered global change factors were found on soil microbial biomass. While we highlight the importance of plant diversity, we also accordingly caution its limited potential in offsetting global change effects on microbial biomass”. With 19 co-authors, this study was a result of an active collaboration among scientists across the world. This study was also co-authored by two other yDiv doctoral researchers: Nathaly Guerrero Ramirez and Katja Steinauer.