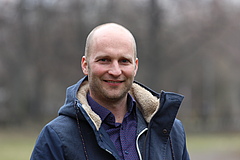 Global climate change is back on the political agenda: representatives from 35 states recently met in Berlin for the Petersberg Climate Dialogue in preparation for the UN Climate Change Conference in Paris at the end of the year, where a new, international climate protection ­ag­reement is to be concluded. The aim is to reduce greenhouse ­gas emissions such as carbon dioxide and to replace fossil fuels such as coal and oil with renewable energies in the long term, with the overall goal of slowing down global warming. The issue that politicians from around the globe have been fighting to tackle for years also forms the research ­topic of Professor Ulrich Brose from the Friedrich Schiller University Jena (FSU). The 45-year-old is investigating the consequences of climate change for global eco­systems and recently moved from the University of Göttingen to the FSU to continue his research. His chair "Theory of Biodiversity ­Scien­ces" is located in the German Centre for Integrative Biodiversity Research (iDiv), which is jointly hosted by the three central German univer­sities of Leipzig, Halle-Wittenberg and Jena.
Brose develops computer models that are able to investigate how modified environmental conditions or human land use impact on species diversity and ecosystem functions. "What will happen, for example, in complex food webs if the average ­temperature continues to significantly increase?" says the biologist, citing a current issue. "Until now we have always assumed that higher temperatures considerably increase the speed of growth processes in ecosystems," explains Brose. "This ought to result in the production of more biomass, which forms the basic food resource of many other organisms."
So more warmth means more food for everyone? Far from it. As Brose and his team were able to demonstrate using mathematical models and simulations, significantly increasing temperatures are in fact more likely to lead to famine: not only is the growth of plants stimulated by higher temperatures; respiration and degradation­ processes also intensify and more than offset the additional growth, according to the biologist.
In his research work, however, Brose does not simply focus on the theory. He reviews his theoretical analyses and prognoses again and again, with an eye to different connections between species diversity, environmental conditions and ecosystem­ func­tions, also in experiments. He works in line with the motto that every theory has to be based on verified, experi­men­tal data and every experiment has to be theoretically founded. Besides the impact of environmental factors on the stability and func­tionality of ecological networks, his research work also sets out to ascertain, among other things, how land use can be transformed in a way that will maintain the biodiver­sity and functionality of natural ecosystems in the long term. In order to do this, he has found an ideal research environment in the iDiv, where the Frankfurt-born scientist already feels very much at home.
Ulrich Brose studied biology in Frankfurt and Hamburg before moving to the University of Potsdam to write his PhD thesis; he gained his doctorate in 2001. A Leopoldina Scholarship then allowed him the opportunity to move to San Francisco State University for a three-year research stay. He returned to Germany in 2004 and, until 2009, led an Emmy Noether group at the German Research ­Foundation (DFG) on complex ecological networks at the University of Darmstadt, where he also habilitated in 2008. After receiving a DFG Heisenberg Scholarship, Brose moved to the University of Göttingen in 2010 before accepting the chair at the FSU. Contact:
Prof. Dr. Ulrich Brose
Institute of Ecology, Friedrich Schiller University Jena (FSU)
German Centre for Integrative Biodiversity Research (iDiv)
Deutscher Platz 5e, 04103 Leipzig
Phone: +49 341 / 9733 205
Email: ulrich.brose@idiv.dePress Offices:
Dr. Ute Schönfelder (Press Officer FSU)
Phone: +49 3641 / 93 10 41
Email: presse@uni-jena.de