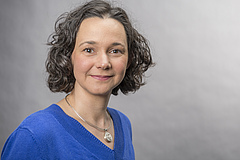 Martin Luther University Halle-Wittenberg (MLU) and the Helmholtz Centre for Environmental Research (UFZ) were successful in their nomination for Germany’s most highly endowed research award,  the Alexander von Humboldt Professorship. Tiffany Knight, a US-American from Washington University in St. Louis, is set to strengthen biodiversity research in Central Germany. The Humboldt Foundation will provide five million euros in funding over five years. The appointment will take place on 1 September 2015. Biologist Tiffany Knight is the third Humboldt professor at MLU taking her place alongside physicist Stuart Parkin and Germanist Elisabeth Décultot. Prof. Tiffany Knight will join the Institute of Biology at MLU where she will set up a new professorship for “Spatial Interaction Ecology”. At the same time she will join the Department of Community Ecology at UFZ. She will also become a member of the German Centre for Integrative Biodiversity Research (iDiv) Halle-Jena-Leipzig. “The Humboldt Professorship has enabled us to attract Tiffany Knight, an outstanding young scientist, to Halle. This is an important step in the continuing development of biodiversity research as a key area of research,” says Prof. Helge Bruelheide from the Institute of Biology at MLU and one of the directors of iDiv. The new professorship adds to existing research at MLU, UFZ and iDiv in an ideal way. “Tiffany Knight wants to investigate how interactions between plants and other organisms contribute to species being rare or not being rare in certain areas. This makes a substantial contribution to understanding and preserving biological diversity,” says Bruelheide. The entire region of Central Germany is now known for biodiversity research throughout the world. The University of Halle and UFZ constitute an important research hub and form part of an excellent scientific landscape that is interconnected on a regional, national and international level. Cooperation with universities in Jena and Leipzig has resulted in numerous large-scale research projects that are funded by the German Research Foundation DFG. iDiv, whose headquarters are in Leipzig, has been the partnership’s biggest success. MLU’s rector, Prof. Udo Sträter, and the scientific director of UFZ, Prof. Georg Teutsch, are both in agreement. “Winning the Humboldt Professorship for Tiffany Knight is a great success for the joint strategy of our two research institutions, both of which are steadily developing extremely successful biodiversity research in the Halle/Leipzig region on an international scale.” Tiffany Knight, who was born in 1975, is currently an associate professor at Washington University in St. Louis, Missouri, USA and has been a guest researcher at iDiv in recent months. She is one of the world’s most renowned scientists in the area of biological invasions and biodiversity synthesis, which works with large quantities of data. In particular, she studies interactions between plants, microorganisms, pollinators and herbivores. In the course of her work she combines different methodologies and theoretical approaches that are used, for instance, in population biology and evolutionary research. Knight’s research is characterised by the fact that she investigates interactions across various ecosystems and spatial scales. Her work on the impact of biological invasions on native biodiversity is highly recognised. Her overview analyses, which have integrated numerous species and various ecosystems, have contributed to our understanding of the rarity of species on a global scale and are considered milestones in biodiversity research.  Further information about research funding through the Humboldt Foundation can be found at: www.humboldt-foundation.de

A photo of Tiffany Knight is available upon request from the press offices at MLU and UFZ.