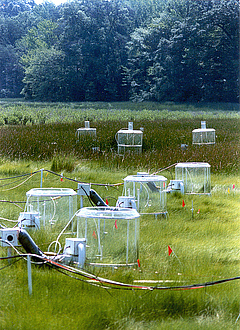 According a new study, inter-annual variation in climate has stronger effects on predators such as spiders than populations of their detritivorous prey, such as isopods.

Leipzig. Elevated concentrations of atmospheric carbon dioxide enhance photosynthesis and plant growth.  Although these growth effects can be sustained in the long term, the magnitude of effects fluctuate greatly from year to year.  A team of scientists from the Smithsonian Environmental Research Center (SERC), the German Centre for Integrative Biodiversity Research (iDiv) and Leipzig University identified a factor contributing to this inter-annual variation. According to their study, inter-annual variation in climate has stronger effects on predators such as spiders than populations of their detritivorous prey, such as isopods. This leads to changes in food chain length, which can in turn influence decomposition and plant growth. These findings emphasise the importance of combined approaches that consider food webs and physiological processes to understand the consequences of global climate change, writes the team in their paper published in the journal Global Change Biology.

Carbon dioxide emissions from fossil fuels such as coal, petroleum and other sources have resulted in the atmospheric CO2 concentration almost doubling over the past few decades, from 280 to approx. 400 ppm. Researchers agree that a higher CO2 concentration will stimulate photosynthesis and growth of wetland plants. However, there is debate as to whether wetland conservation might therefore be an effective strategy to absorb excess CO2 and mitigate future climate change. Various experiments are being conducted around the globe to investigate these specific effects.

The longest running of these experiments was initiated in 1987 by Professor Bert Drake in brackish wetlands on the Atlantic coast of the US state of Maryland. The transitional zone between salt and fresh water was chosen as these highly productive marshland areas provide many essential ecosystem services, and are threatened in many regions by human land development. The Smithsonian Environmental Research Center is examining plant communities on a marsh that is dominated by American bulrush (Scirpus olneyi, a C3 sedge) and saltmeadow cordgrass (Spartina patens, a C4 grass). Two different types of plants, therefore, are being evaluated. Photosynthesis of C3 plants, which include over 95 per cent of plant species on earth (e.g. trees), are thought to be more sensitive to changes in atmospheric CO2 than C4 plants which include crops such as sugar cane and corn.  An experiment was conducted in several test chambers to examine the influences of elevated CO2 and on growth of C3 and C4 plants. At 365 ppm, the CO2 concentration in some chambers was the same as that found in the atmosphere today. The CO2 concentration was almost doubled to 705 ppm in other chambers, to simulate a future scenario.

The team evaluated the biomass and growth of the plants, not only to elevated CO2, but also experimental manipulation of detritivores such as isopods and their predators such as Pardosa littoralis spiders.  These invertebrate food chain treatments were chosen based on a six-year field study where invertebrate populations were monitored.  "The field study showed strong variations in detritivore and spider populations, whereby the top-level predators were the most sensitive  to climate variation. " commented Dr Jes Hines from the iDiv, whose study was able to demonstrate a new mechanism which helps explain the inter-annual variations in plant growth when CO2 concentrations are elevated.

In the case of American bulrush, biomass production was enhanced by the presence of detritivores especially in elevated atmospheric CO2 concentrations. These findings represent an important step in illustrating the connections between climate, the food chain and biomass production in the wetland ecosystem. “The study emphasized the importance of viewing the ecosystem in its entirety rather than looking at sub-divided compartments," stressed Professor Nico Eisenhauer from the iDiv and Leipzig University. Carbon dioxide is just one of many variables. Besides CO2, the sensitive wetland ecosystem is also affected by nitrogen deposition, salinity, and precipitation. There are therefore many more variables and much still to be done for experimental ecology. Tilo Arnhold

The study was funded by the EPA (EPA-STAR) and the German Research Foundation (DFG).

The CO2 Lab at SERC

iDiv is a central facility of the University of Leipzig within the meaning of Section 92 (1) of the Act on Academic Freedom in Higher Education in Saxony (Sächsisches Hochschulfreiheitsgesetz, SächsHSFG). It is run together with the Martin Luther University Halle-Wittenberg and the Friedrich Schiller University Jena, as well as in cooperation with the Helmholtz Centre for Environmental Research – UFZ.