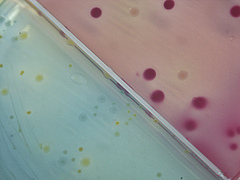 Leipzig. The relationship between biodiversity and ecosystem functioning greatly depends on the prevalent environmental conditions. An interdisciplinary team consisting of microbiologists and ecological modellers from the Helmholtz Centre for Environmental Research (UFZ), the German Centre for Integrative Biodiversity Research (iDiv) and the Stockholm Resilience Centre has now tested this hypothesis which is considered crucial for biodiversity research. Through extensive laboratory experiments on microbial communities, the researchers were able to demonstrate that although bacterial species may exhibit functional redundancy, the magnitude of this redundancy is strongly affected by environmental conditions. Species that play a minor role in how an ecosystem functions in favourable environmental conditions may assume a key role in unfavourable environments. This is another argument in support of sustaining biodiversity in times of climate change. The results were published in the Proceedings of the National Academy of Sciences (PNAS, Early Edition).

It goes without saying that diversity is better than monotony. But what difference does the presence of one, six or twelve tree, bird or bacterial species make to an ecosystem and its ongoing processes? "Some species perform functions in the ecosystem that are often only required once harsh environmental conditions ensue," said Dr. Antonis Chatzinotas, one of the two lead authors of the study. He is leader of the Microbial Systems Ecology working group at the UFZ and member of iDiv. "We have now been able to demonstrate in microbial communities that the species' level of interdependence varies in terms of the prevalent environmental conditions. In our studies, this interdependence increased with worsening conditions."

It has been known for quite some time that biodiversity facilitates processes in an ecosystem, e.g. biomass production or metabolic processes. It is also known that several species may overlap in terms of the tasks they perform in the ecosystem, so they are functionally redundant. Therefore, if only redundant species are lost, the ecological processes can continue to be sustained. However, if essential species are absent from the ecosystem and their role cannot be compensated by others, these processes will be impaired. "We now know that this crucially depends on the respective environmental conditions," explained Dr. Ingo Fetzer, the other lead author of the study, who worked at the UFZ until 2012. If species were redundant in good environmental conditions, their loss may even be considered "bearable". Yet this situation could change very quickly if the prevalent conditions worsen. Individual species would suddenly assume completely new roles in the ecosystem to keep the processes going.

The team of researchers investigated these relationships using microbial communities. In extensive laboratory experiments, they exposed almost 900 microbial mixtures with various numbers and compositions of species to three different environmental conditions: good conditions in which many of the organisms thrive; less favourable conditions; and bad conditions with a very high salt concentration. They observed how much biomass the individual communities of species produced as an indicator of ecosystem functioning.

The three scenarios revealed that the higher the biodiversity in the "model ecosystem", the more biomass was formed. Dr. Chatzinotas explained one particularly exciting discovery: "Under bad conditions, none of the species used could produce biomass on their own, but production suddenly began if certain other species were added to the ecosystem." The reason for this may be that a diverse ecosystem has more species on hand to perform key roles after environmental changes. Above all, biodiversity also provides the basis for new and crucial interactions between the species. For example, one species' metabolic products could be used by another species.

Laboratory test systems with microorganisms are particularly suitable for investigating these kinds of fundamental ecological issues. Researchers can use them to perform a large number of experiments with many repetitions on a very small scale. It is also much easier to control the experimental conditions and keep them comparable than in a field experiment. More research now needs to be conducted to reveal whether these findings can be applied to higher organisms, animal and plant communities. "The insight that the value of biodiversity must not only be assessed in favourable external conditions, but above all in harsh conditions, is crucial," said Dr. Antonis Chatzinotas. In times of climate change, this is an important argument in favour of sustaining biodiversity and preserving every single species.

This work was supported by the Helmholtz Centre for Environmental Research – UFZ in the scope of the SAFIRA II Research Programme (Revitalization of Contaminated Land and Groundwater at Mega-sites, Project “Compartment Transfer”).