“Teamworking in Science” put to test at the yDiv retreat 2015 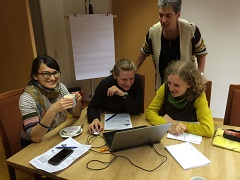 The yDiv annual retreat brings together all yDiv doctoral researchers to spend time together and learn about a topic that is important to all.The 2nd yDiv retreat from 8 to 9 October 2015 was all about the successful communication in scientific teams and teamworking in science. Research shows that especially in the case of complex problems, collaborations that cross borders of scientific disciplines and/or institutions and countries are of essential importance.

The program touched on various central problematic areas that emerge from scientific teamwork and provided impulses how to tackle them: The introduction to the topic was made by Professor Stan Harpole who illuminated why team work is such a hot topic at the moment and discussed the central importance of scientific team work from iDiv’s perspective, as iDiv’s mission requires integration across disciplines, approaches and scales. Junior research leader Meredith Schuman described the challenges of transitioning from a team member to a team leader and gave valuable advice from the lessons she learned. Following that iDiv Professor Nicole van Dam shared her long experience in leading successful research teams and emphasized why good leadership is so important to the functioning of teams. As the authorship of scientific publications can be understood as one of the most pressing practical questions related to scientific teamwork, sDiv coordinator Marten Winter talked about the most common conflicts but also best practice solutions regarding authoring scientific papers with a large group of collaborators. Josef Settele from UFZ shared his extensive experience in leading and coordinating projects that cross borders of scientific disciplines, institutions, and countries. He gave a valuable insight into the importance and function of large-scale projects and the challenges related to building large and diverse groups. To round up the topic the theory was also put into practice in small groups, led by André John and his team. The participants were entering a computer-simulated scenario as chocolate producers and took over the SchokoFin factory in Vienna. After the simulation the participants debriefed the specific communication within their team and took away communication tools to help better reduce uncertainty in cross-cultural and interdisciplinary teams.