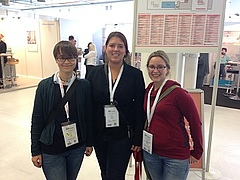 Three yDiv doctoral researchers, Maria Voigt, Solveig Franziska Bucher and Patrizia König, joined the Her Career fair in Munich on the 15-16 October 2015. Her Career is a career fair aimed at female graduates, women in specialist and executive positions, and female founders.

Maria Voigt described the programme of the fair as very diverse, with talks and discussions ranging from equal pay, strategies for shaping career paths, balancing family and work, to how to best motivate employees and implement flexibility in the work environment. One of the leading themes of the event was to explore the reasons that hold women back in their professional careers, and how these obstacles can be overcome.

“I was a bit worried before going to the fair that it was not going to be applicable to an academic career, but I found that many of the discussed issues are relevant across professions. Also, exactly because of the focus on professions “outside” of science, the talks gave valuable insights into this world, and how academia fares in comparison”, says Maria.

She was excited to have met many inspiring role models, and benefited from lots of new ideas and thoughts. The trip was funded by the iDiv Female Career Fund, which offers grants twice per year to support young women who want to pursue a career in the academia. The primary aim of the fund is to increase the scientific network and visibility of female scientists. „Activities like these intrinsically strengthen the position of female scientists when they climb up the academic career ladder. Hopefully this will lead to a more even gender balance in  higher academic positions very soon. I am very pleased that the DFG supports iDiv to achieve this goal“, says Nicole van Dam, the Chair of the Female Career Fund Committee.