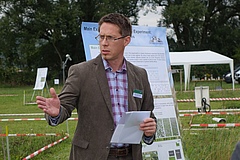 Professor Nico Eisenhauer during the evaluation of the Jena Experiment. Photo: Olga Ferlian/iDiv

The Jena Experiment, one of the longest running grassland biodiversity experiments worldwide has now been evaluated for the sixth time. In September, an evaluation committee visited the Jena Experiment field site and questioned researchers during a panel review held in the Friedrich Schiller University. A total of 9 sub-projects with 22 applicants from 14 research institutions were reviewed. Applicants included professors working in universities located in Switzerland and the Netherlands, as well as  4 scientists from iDiv (Nico Eisenhauer, Ulrich Brose, Jes Hines, Christiane Roscher). iDiv professor Nico Eisenhauer managed the evaluation and will take over the role as speaker from Prof. Wolfgang Weisser if the funding will continue.
In contrast to the ongoing phase of the project with many experiments and practical work, the next phase will focus more on the synthesis of data and meta-analyzes. This will also include data from other long-term experiments, such as the Biodiversity Exploratories.

The Jena Experiment has been running since 2002, resulting in large data sets, long time series and high-ranking publications. The German Research Foundation (DFG) will publish the results of the evaluation at the end of this year. This will determine whether and how this unique experiment will be continued in the future.