Symbiosis between mycorrhiza fungi and tress 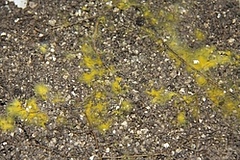 The yellow fungi Piloderma croceum and its coexistence with oak is the focus of the DFG research project "TrophinOak". Image: Dr. Sylvie Herrmann/UFZ

This conclusion was drawn by an international team of researchers who performed the first comprehensive comparative phylogenomic analysis on mycorrhiza fungi, now appearing in the reputed scientific journal Nature Genetics. These sequences provide crucial information on how the symbiosis between fungi and trees have evolved.

iDiv supported the project with funds for sequencing and analysis. Its international synthesis center sDiv also invited the whole MGI consortium to a workshop held in June 2011 in Leipzig, where the team worked commonly of the Nature Genetics paper. With the help of these new genetic investigations, the researchers hope to better enter into the secrets of the diversity of mykorrhiza fungi and to progress toward a deeper understanding of their role for forest ecosystems.

Link to the paper