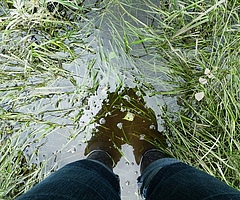 Can biodiversity help protect ecosystems in unusual climatic events? Given the continued extinction of species and climate-change associated with increasingly extreme and sudden changes in the weather, the answer is immensely important. A current study of over 40 grassland experiments in Europe and North America with key participation by scientists from the German Centre for Integrated Biodiversity Research (iDiv) of Halle-Jena-Leipzig now confirms that ecosystems with high biodiversity display greater resistance in extreme climate events. The study appeared in "Nature" (DOI: 10.1038/nature15374). Biodiversity is an important factor for biomass production of plants. The idea is not new but can biodiversity also help ecosystems to better resist the effects of extreme weather events? And does this stabilising effect occur during extreme weather or after – or both? An international team of scientists has now found out that species-rich plant communities are generally more resistant to exterior climatic influences. Led by Dr Forest Isbell of the University of Minnesota, over three dozen researchers from the USA, Germany, the United Kingdom, Ireland, France, Switzerland, the Netherlands, the Czech Republic and Japan took part in the study. A total of 46 grassland experiments in Europe and North America were observed over several years and the data obtained were analysed. Firstly, the scientists ranked every year they investigated on a five-point scale ranging from "extremely dry" to extremely wet". They then investigated the annual above-ground biomass production of plants at higher and lower levels of biodiversity. The result was that the greater the number of plant species growing there, the lesser the effects of extreme wet or dry periods on the biomass production of grassland. The study also included data from the Jena experiment, where the diversity of various different species-rich fields has been investigated on the Saale in Jena since 2002. "This study will help us better understand which role biodiversity plays in the struggle by Nature against unforeseen events," said Nico Eisenhauer, co-initiator and co-author of the study and professor at the iDiv and the University of Leipzig. In Eisenhauer's view, the results show "very impressively that the destruction of the environment is having a long-lasting, negative effect on the natural balance of our ecosystems." The study found that, during extreme weather conditions, productivity in plant communities with only one or two species changed by an average of 50 percent, whereas they changed only half as much in communities with 16 or 32 species. "We scientists have been looking for decades for stabilising factors for ecosystems," Eisenhauer explains. "These results should show us researchers and political actors how far biodiversity helps stabilise our ecosystems – especially given worldwide climate change." However, there was one result that the researchers did not expect – the study also showed that biodiversity has no particularly major influence on how quickly an area returns to normal biomass production after a drought or heavy rains. Dylan Craven, co-author and an iDiv post-doctoral researcher, summed up: "A future challenge will be to investigate which factors – except biodiversity – cause ecosystems to recover after extreme climatic events." Besides the iDiv Research Centre, the universities of Leipzig, Halle-Wittenberg, Jena, Bayreuth, Greifswald, the Technical University of Munich and the Helmholtz Centre for Environmental Research (UFZ) in Germany also took part in the study. Tobias Wagner Go directly to the study at nature.com Further Information: Prof. Nico Eisenhauer (from 26.10. available for queries)
Head of iDiv research group Experimental Interaction Ecology
Phone: +49 341 - 97 33167
Email: nico.eisenhauer@idiv.deProf. Helge Bruelheide
Co-Director iDiv
Professor for Geobotany at the Martin Luther University Halle-Wittenberg
Phone: +49 345 55 26222
Email: helge.bruelheide@botanik.uni-halle.deDr. Alexandra Weigelt
Private lecturer / University of Leipzig
Phone: +49 341 97 38594
Email: alexandra.weigelt@uni-leipzig.deDr. Dylan Craven
Postdoc Experimental Interaction Ecology
Email: dylan.craven@idiv.de Tobias Wagner, Public Relations iDiv
Phone: +49 341 97 33154
Email: tobias.wagner@idiv.de
« back to Archive 2015
Share this site on: