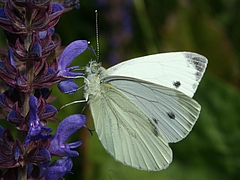 The green-veined white (Pieris napi) is widespread and abundant throughout Europe and one of six species that showed a major population collapse in the UK following the 1995 drought. (Photo: Martin Wiemers / UFZ)

Our ecosystems are affected not only by climate change, but by a plethora of interacting global change factors, above all pollution and land use change. Disentangling these factors is a complex challenge, but important for the implementation of effective measures to protect biodiversity. The journal Nature Climate Change just published a comment of two biodiversity scientists at UFZ, iDiv member Josef Settele and Martin Wiemers, on a new study by British scientists in the same journal, which demonstrates how citizen science can contribute to this endeavor. Tom H. Oliver from NERC Centre for Ecology and Hydrology and the University of Reading and other colleagues from the United Kingdom investigated how climate change and habitat fragmentation affect drought-sensitive butterflies. They analyzed the responses of 28 species to an extreme drought event in 1995 using long-term monitoring data from the UK Butterfly Monitoring Scheme, one of the oldest citizen science projects in Europe. Combined with satellite data about land use they were able to describe the effect of different surrounding habitat types on the population dynamics of these butterfly species after the drought event. They conclude that butterflies are threatened by climate change, but we can mitigate those effects to some extent by better land use management. The persistence of these drought-sensitive butterflies seems to be achieved more effectively by restoring semi-natural landscapes to reduce habitat fragmentation than by simply maximizing habitat area. „This example of Oliver et al. demonstrates the opportunities offered by large scale and long term monitoring data which can often only be collected with the help of the general public via citizen science projects”, emphasizes Josef Settele, who is also member of the German Centre for Integrative Biodiversity Research (iDiv). In addition to facilitating the collection of valuable data, collaboration with the public might also force scientists to step out of their comfort zone, which may well help to improve our intellectual climate. Comment:
Josef Settele and Martin Wiemers: Interacting global change drivers
http://www.nature.com/nclimate/journal/v5/n10/full/nclimate2815.html Publication:
Oliver et al.: Interacting effects of climate change and habitat fragmentation on drought-sensitive butterflies
http://www.nature.com/nclimate/journal/v5/n10/full/nclimate2746.html
« back to Archive 2015
Share this site on: