Aliens in the Anthropocene: 4% of the global flora is somewhere an alien 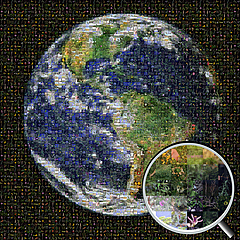 According to study published in Nature (and see Nature Editorial), iDiv scientist Marten Winter, who is among the core co-authors, says that almost 4% of the global flora become naturalized somewhere in the world outside of its native range due to human activity. "We analysed 481 mainland areas and 362 islands and found almost 13.200 plants being not native there." GloNAF (Global Naturalized Alien Flora) is the name of the database behind those results and was started to live 4 years ago. "We already published other analyses with parts of GloNAF." See news about a paper in Global Change Biology, which was highlighted in Nature plants recently.

van Kleunen et al., Alien plants in the Anthropocene: exchange and accumulation of species around the world

Caption: The mosaic was constructed by Daniel Nickrent (co-author of the study) based on a public domain photo of planet earth. A total of 367 images submitted by coauthors representing 360 introduced, naturalized, or invasive plant species worldwide were used for the mosaic tiles. For more information about it please contact Marten Winter."