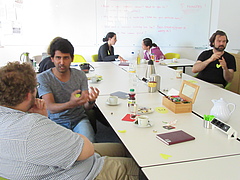 On Thursday the 25th of June, yDiv and sDiv launched the new mentoring programme of iDiv with scientific speed-dating. Compared to supervision, mentoring is a less strictly defined relationship, where the mentor, in this case a post doctoral scientist, supports the doctoral researcher, shares their experiences of everyday researcher life, and may also help them build professional networks. Successful mentorships may also include specific support in methodological questions.

The structure of Thursday’s event followed that of a romantic speed-dating setting: doctoral researchers circulated from table to table, so that each of them got to talk to each of the post docs for 5 minutes regarding their scientific projects and priorities for mentoring.

Lively discussions took place during the two-hour event, and all participants agreed that the bell always rang “too soon” to mark the end of each talk. Many post docs are already part of the PhD Advisory Committees of yDiv doctoral researchers, and in this event, several ideas of additional mentoring relationships were initiated.

iDiv is all about creating links and collaborations between people, and events like this help us get a better picture of what each other are working on. Following the positive feedback and demand from those that could not join us on Thursday, yDiv and sDiv will work together to organise another similar event later in the year. We also believe our atmospheric candles to be at their best in the winter time!