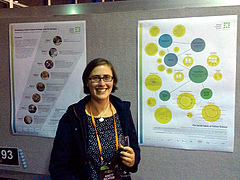 The deliberate design of Australian citizen science projects such as the great koala count (http://koalacount.ala.org.au/) or the school of ants (http://schoolofants.net.au/), issues on data collection and management as experienced with the Living Atlas of Australia (http://www.ala.org.au/) as well as forms and social impact and the evaluation of project effectiveness of citizen science were discussed between 23th and 24th July at the Academy of Science in Australia. Throughout the course of the two day conference, lively scientific discussions and a lot of networking took place in the settings of the Shine Dome in the Australian capital city of Canberra.

The conference, organized by the Australian Citizen Science Association (http://www.citizenscience.org.au), received great attention from around Australia, as well as from the US and members from the European Citizen Science Association.  Dr. Anett Richter from the Department Ecosystem Services and project coordinator of the Citizen Science Capacity Building project GEWISS for Germany, was invited to present the deliberate design of the Citizen Science Strategy for Germany and to provide insight into her research of the social fabric of citizen science based on social network analysis. The outstanding design of the posters and the novel findings by Anett and her colleagues were well received by the participants. Anett’s presentation included various discussions of her findings on the network structure of citizen science and the benefits of citizen science to scientific literacy and educational outcomes of citizen science projects.
The variety of poster presentations showed the large amount and diversity of citizen science activities in Australia, ranging from projects to map the regional fauna and flora by members of the communities or the engagement of the community in order to detect feral and invasive species as well as early detection of organism that are of biosecurity interest. The presented talks underlined the needs of citizen science such as strategic missions and visions as well as more robust funding and a broader recognition of the benefits of citizen science among the science and policy members.