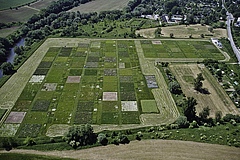 A long-term study carried out by the Max Planck Institute for Biogeochemistry (Jena) in cooperation with iDiv has demonstrated now for the first time how the biological diversity of plants increases this carbon storage. The scientists have shown that species diversity not only boosts the formation of plant biomass but also increases the activity and genetic diversity of soil microorganisms increasingly transforming the plant carbon into soil organic matter. Thus, the carbon is bound for longer and sustainably removed from the atmosphere where it acts as climate-damaging greenhouse gas.