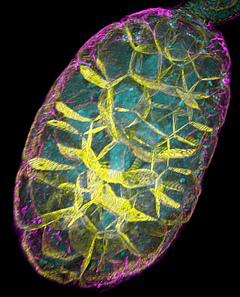 Of all obligate intracellular bacteria, Wolbachia is probably the most common. In general, Wolbachia are either widespread, opportunistic reproductive parasites of arthropods or essential mutualists in a single group of filarial nematodes, including many species of medical significance. To date, a robust phylogenetic backbone of Wolbachia is lacking and consequently, many Wolbachia-related phenomena cannot be discussed in a broader evolutionary context. In an iDiv funded study a scientist team with the participation of Dr. Christoph Bleidorn (University of Leipzig) presented the first comprehensive phylogenomic analysis of Wolbachia supergroup relationships based on new whole-genome-shotgun data. The results suggest that Wolbachia has switched between its two major host groups at least twice.

To the paper on nature.com